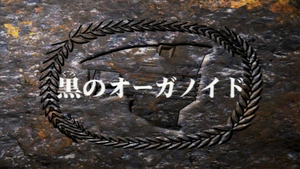 The Black Organoid is the twelfth episode from the anime series Zoids: Chaotic Century based on TOMY's Zoids model franchise.

The episode starts with a conference between Marcus and Prozen. The former believes that advancing in the middle of a sandstorm is reckless, due to the potential danger created by sleeper Zoids, but the latter assures him that the way had been cleared in advance, allowing unimpeded access to Cronos Fortress. This was done by a sole Zaber Fang.

Meanwhile, Van and co. stumble across the ruins of many Guysaks, but notice that there are no Imperial wrecks among the carnage. They proceed ahead and notice many Republicans digging trenches. Deciding that the preparations for conflict do not bond well for them, they decided to simply grab supplies and run, but are encircled by soldiers before they can even do that. Irvine and Moonbay surrender and are arrested, but Van and Fiona escape.

They flee into farmland and while they evade the patrols, a boy named Raven takes out some Republican soldiers. Before he can defeat them all, Van and Fiona grab him and run.

are brought to the Commander, Major Ford. He explains that a black Organoid attacked and destroyed an entire battalion of sleepers. They had arrested Irvine and Moonbay due to their involvement with Van and, more importantly, Zeke. Ford gives Irvine and Moonbay a letter or recommendation that was prepared by Captain Herman (whom they had helped earlier). The meeting is interrupted by a report indicating that Van, Fiona and Raven, had been spotted.

The Republican forces move out, releasing Irvine and Moonbay as they do so, while Van tries to talk to Raven, with very little success. Irvine approaches them, but recognizes Raven as "big trouble", and explains that he was one who destroyed the sleepers. Raven offers a simple reply, that he despises Zoids.

The Republicans attack and Raven calls forth Shadow, his Organoid, before getting into his Zaber Fang. He turns and attacks the horde of Godos, totally and brutally annihilating them, all without the help of his Organoid (whom he had left behind). Irvine moves to act as Moonbay, Zeke and the Shield Liger also show up. Van is the first to fire at Raven, but is unable to match him, and Raven quickly defeats Van. Irvine steps in, but fails to harm him. Moonbay also considers attacking, but Raven ups an leaves, after being called back by Marcus.