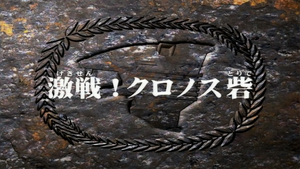 The Battle of Cronos is the thirteenth episode from the anime series Zoids: Chaotic Century based on TOMY's Zoids model franchise.

The episode begins with Van deciding to wait and attack Raven, while Irvine up and leaves, seemingly eager to get out of the way of the war.

Meanwhile, Marcus, with the help of Raven, makes significant progress into Republican territory, while Major Schubaltz, who believes that Marcus has progressed too far, changes his strategy to attack the forces at Mt. Osa, but still agrees to witness Marcus' (who is eager to seek personal glory) unit's solo attack on the Cronos base.

Irvine infiltrates the Cronos base, hoping to find a Gojulas, but instead overhears the Republic discussing a "bold plan".

Moonbay and Fiona keep trying to persuade Van to leave, but he doesn't give in, much to their surprise. Irvine returns and informs Van as to Raven's whereabouts, and Van sets off to get his revenge.

Schubaltz confronts Raven, who guesses as to Schubaltz's plans; to force a ceasefire through the display of overwhelming force. However, Prozen instead changed the plan so that exactly this would not happen, instead using only Marcus and Raven. Van jumps onto Raven's Zaber Fang and demands a rematch and at dawn, just as the battle for Cronos fort begins, their fight begins. This latter battle, while intense, is an illusion, as the Republican Zoids are actually simply unmanned preprogrammed units.

Van is very soundly thrashed by Raven, and even though Irvine intervenes, Raven is not harmed. It is only when Van raises his shield and uses it to ram Raven, is any significant damage done. But this too proves to be a false hope, as Raven fuses with Shadow and shatters Van's shield, knocking Zeke out of the Shield Liger. Disgusted with their abilities, Raven leaves.

This disgust is also leveled toward Marcus' unit, which is wiped out by a trap left by the Republicans; Cronos base was rigged to self-destruct an attack which, coupled with Marcus' hasty nature, proved to be devastatingly effective.

Retrieved from "https://zoids.fandom.com/wiki/Zoids:_Chaotic_Century_Episode_13?oldid=63075"
Community content is available under CC-BY-SA unless otherwise noted.