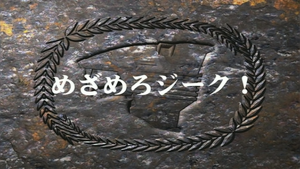 Wake Up! Zeke! is the fourteenth episode from the anime series Zoids: Chaotic Century based on TOMY's Zoids model franchise.

Starting with the Empire's forces regrouping after the damage done to them in the previous episode's trap. Due to the change in plans in the prior episode, Schubaltz's forces are unharmed and therefore they are still a threat to the Republic, who are themselves regrouping. (Schubultz: "My units were unaffected").

Meanwhile, Zeke, badly injured after the battle with Raven, is brought to an abandoned town. Van beats himself up about it, but eventually Dr. D shows up and examines Zeke. He proclaims that Zeke needs "Zoid Magnite" to be healed. This is a blue rock that is only found in the crater of an active Volcano, the nearby Mt. Osa, which is, incidentally, a critically important military facility that is being targeted by both sides. Irvine heads off as well, arming himself with a new weapon he had been given permission by Dr. D to use.

With this weapon Irvine goes after Raven, while Van successfully dives into the depths of the Volcano to get the Magnite. Irvine is somewhat successful at catching Raven off guard, and impales the Zaber Fang in a bed of spikes. This isn't enough to defeat him, and he fuses with Shadow, ripping off his own injured leg and outruns Irvine's attacks, allowing Raven to get the better of the Command Wolf. Irvine manages to escape using some flashbangs, while Van and Moonbay also successfully reach Zeke with the Zoid Magnite. This reacts with the organoid and successfully revives him.