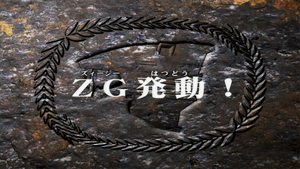 Deploy the ZG! is the fifteenth episode from the anime series Zoids: Chaotic Century based on TOMY's Zoids model franchise.

The episode begins with the Empire's forces struggling to clear rubble laid out by the destruction of Cronos Fortress several episodes prior. Nonetheless, they still make some progress toward the Mt. Osa base.

Van, Fiona, Moonbay and Dr. D look after the still-unwell Zeke, while Irvine heads to a Republican base to look for weapons to fight Raven with.

The battles begin to gear up, with Schubaltz taking on a group of sleepers (Guysaks), Herman observes in an overhead Pteras. Van sees the battle in the distance and heads off to help Irvine, who he knows is in Mt. Osa.

Krueger gives a speech to Irvine on the nature of Zoids, that Zoids aren't tools, before the Empire start to attack the base, knocking Krueger down. Herman, having arrived only a short time ago, takes to piloting the Gojulas himself. Van too makes his way to the base.

As the Gojulas reveals itself, the Imperial forces are immediately taken aback, in awe of its great stature. Even Raven watches this deployment; in a few shots, the ZG totally decimates the Empire's forces, taking no damage from their counterattacks. The force from the shots knock Irvine from his ledge, but he is saved by Van's Shield Liger and Van is revealed to be able to erect the shield even without Zeke. Schubaltz promptly retreats, but Herman proves incapable of managing the Gojulas over the rough terrain, and trips, allowing his opponent to escape.

The episode ends with Zeke making a full recovery.