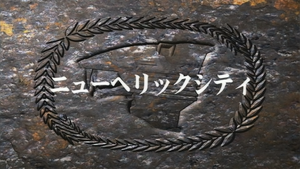 New Helic City is the sixteenth episode from the anime series Zoids: Chaotic Century based on TOMY's Zoids model franchise.

Starting with a celebration in New Helic City praising the success of the ZG's defense of the capital. Van bumps into an escaped Imperial soldier who is being attacked by a bunch of civilians in a back alley. He saves him, but in return is attacked by Republican soldiers, who refuse to believe that their letter of recommendation is authentic, so instead they run, and are saved by Dr. D.

He takes them through the sewers to the underside of the research institute, which he then breaks into. Here, they find a stone with the same writings on it that they had previously seen in ruins that had triggered Fiona's memory. They are surrounded by Republican soldiers and captured before Fiona can remember anything.

They are tossed into jail and the President, after seeing the so-called "fake" letter of recommendation written by Captain Herman (revealed to be her son), meets with them. She immediately recognizes Dr. D and releases them.

Meanwhile, the escaped prisoner steals a highly modified Command Wolf and uses it to wreak havoc on the city, much to Van's horror. Feeling responsible, Van sets out to attack the prisoner with his Shield Liger. He stops the Command Wolf but lets the prisoner escape.

Over the ocean, Herman, who had been out investigating a suspicious iceberg, is shot down, after noticing that the glacier is actually artificial.