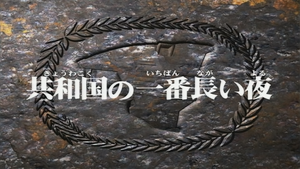 The Longest Night of the Republic is the seventeenth episode from the anime series Zoids: Chaotic Century based on TOMY's Zoids model franchise.

The episode begins with Herman, who had been shot down last episode, swimming back to New Helic City, trying to warn them of the impending invasion.

Van and Co. talk about the Gurrill ruins, their only clue as to the mysterious "Zoid Eve". However, Moonbay alerts them to the fact that the Imperial elite are also looking for this elusive legend.

Meanwhile, the President discusses the state of the war, and while the troops express confidence in the ability of the ZG to guard their capital from the land-based forces, or at least for long enough so that a cease fire may be negotiated with the Empire. Krueger does not share this confidence, and is concerned that the city may fall at any time.

The soldiers become increasingly impatient at the long wait for Herman's return. The President does not allow a search party to be sorted, fearful of a drop in manpower, as the fact that the northern Aurora is blocking long-range communications means that they would not be able to be recalled at short notice. Moonbay, concerned about their party's funds, happens to overhear this predicament and agrees to offer unofficial help in the matter.

Meanwhile, Prozen's ship draws nearer, and they begin to launch snow that jams communications so as to hide their imminent approach.

Moonbay, with the help of Van and Irvine, steals a Pteras and sets out to search for Captain Herman. While flying, Fiona notices that the snow is fake, as does Dr. D, who, while fishing, pulls up Captain Herman and his crew. He is informed by Dr. D that the snow is interfering with the radio. Van arrives to pick him up as the Empire begin their attack. Schubaltz explains his plan, that the land forces are simply a decoy to lure out the Gojulas, while the real force arrives by sea.

Van returns to the base, only to find it destroyed by none other than Raven. Serious about beating Van, Raven fuses with Shadow and the two duel as the glacier approaches. With Herman's guidance, Van actually manages to match Raven in combat.

As the battle unfolds, Marcus sets out after the Gojulas, and breaks formation seeking personal glory. Krueger, alert to the plan, with help from Fiona and Moonbay, decides to abandon Mt. Osa base, while Irvine gets Ford to return to New Helic City. His retreat is covered by O'Connell's Red River Command Wolf squad. Still locked in combat with Raven, Herman directs Van to attack Raven at a single specific moment, and, in doing so, Van is able to inflict significant damage to Raven. Their battle is interrupted as the main fleet opens fire onto the ground they are standing on, and Van flees.