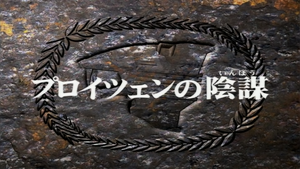 Prozen's Conspiracy is the nineteenth episode from the anime series Zoids: Chaotic Century based on TOMY's Zoids model franchise.

The episode begins with a prison break, as Rosso's men bust him out of jail.

Van, Moonbay, Fiona and Irvine set off for the Gurrill ruins, but only Moonbay does so with any degree of haste, the others not worrying about the empire, due to the recent change in rule. In the empire, Rudolph is taking to his duties studiously, but Prozen is given much of the authority, as Rudolph's young age means that he is not given absolute power.

Rosso is busted out, and even given an Iron Kong, so that his gang can kidnap Rudolph and ransom the Empire's government, both for money and revenge for being betrayed by the army.

Prozen too has his own plots, deciding to use a Command Wolf to assassinate Rudolph, so as to usurp the throne and begin a new war on the Republic. These two groups interact, and Prozen's team move to attack Rosso's group, but by cramming themselves into a Molga, Rosso's gang is unharmed by the barrage. They in turn attack Prozen's group and damage their command wolves, using their Redler to mount a surprise attack. However, in doing so, they cause Rudolph's guards to move in to investigate. The guards are ambushed by Prozen's group, while Rosso's uses the attack as a diversion to launch an attack on the palace. They are successful in their raid, and escape with Rudolph. It is then that Rosso notices that Prozen's men are actually out to kill, and not capture, Rudolph.

Retrieved from "https://zoids.fandom.com/wiki/Zoids:_Chaotic_Century_Episode_19?oldid=63715"
Community content is available under CC-BY-SA unless otherwise noted.