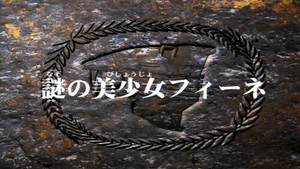 The Mysterious Fiona is the second episode from the anime series Zoids: Chaotic Century based on TOMY's Zoids model franchise.

Picking up where the last episode left off, with defeated bandits report back to their leaders, Rosso and Viola, the former of the two instantly recognizing their story is evidence of an Organoid. Interested, they make plans to return to capture Zeke for themselves. Meanwhile, Van attempts to talk to the girl he found in the ruins, but has difficulty conversing to her because of her inability to remember anything about herself, as well as her inability to comprehend basic mannerisms, though he manages to get a name out of her, "Fiona", which he proceeds to use as her name. Eventually they return to Van's home, the Wind Colony. He introduces her to his sister, though he doesn't tell her the full story (thinking she wouldn't believe him if he told her that she came from a capsule), and then proceeds to introduce Fiona to the village elder, although he quickly leaves, to avoid being lectured for heading out into the desert alone.

As he leaves, the bandits return, piloting Molgas and a Redler and proceed to attack the village. They round up the villagers and fire several volleys into the village. Maria, Van's sister, tells them that Van (and Zeke) had already left, so instead they take her hostage, using her to blackmail the village into getting Zeke for them. When Van returns, the villagers tie him up and take Zeke, hoping to save both Van and Maria. However, Van manages to escape and he, along with Fiona (who had been told to watch Van, but not to stop him, and was hence following him), head to the Shield Liger to fight the bandits.

The bandits renege on their promise and use an electric whip to subdue Zeke, while attempting to keep Maria as a hostage. Van shows up in the nick of time and topples one of the bandit's Molgas, but his Liger is much less responsive than the previous day and fails to deploy its missiles, making him unable to defeat the bandits. As the bandits attack him, Fiona closes her eyes and Zeke reawakens, fusing with and healing the Shield Liger. The Liger's responses greatly improve, and Van becomes able to use his missiles. With this, the bandits panic and retreat.

Van decides to protect both the village and Zeke, and as such, tells the village the true story behind Fiona and Zeke and leaves, to ensure that the bandits cease to target the Wind Colony.