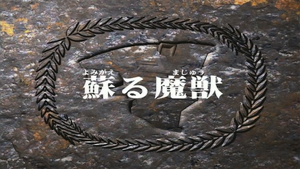 The Resurrection Monster is the Twentieth episode from the anime series Zoids: Chaotic Century based on TOMY's Zoids model franchise.

This episode begins with Prozen overlooking a mysterious project, but no more is revealed at this point in time.

Van and co. are travelling off-road toward the Gurrill plateau in order to avoid the Empire, while Rosso and Viola, trying to flee with Rudolph, also head in this direction (their other two team members had stayed behind due to their injuries and damaged Zoids). Rudolph tries to escape, but is unable to make it far in the desert heat. Out of necessity, he is forced to stay with Rosso and Viola.

Van's group make it to the ruins, but find it rather large, so they split up. Moonbay and Irvine inadvertently set off a trap, with a Rev Raptor sleeper Zoid being awakened and chasing them. A second one wakes up and also chases after Van and Fiona. Zeke attacks it, but is unable to stop it and is trampled and left behind. The others make a run for it, and are only saved when Zeke fuses with the Shield Liger and gets Van in the cockpit. The not-so-intelligent sleepers are quickly felled by Van, but are followed by a huge number of them. Van defeats them too, using his Zoid's shield, allowing them to explore the ruins in peace.

Meanwhile, Rosso's group trades with the mercenaries, the same group who had tried to kill him in the episode prior. However, the trade is a hoax and Rosso knows it, with the money offered simply being used as a disguise to hold a bomb. Rosso kicks the bomb toward the other assassins and Viola covers his escape as he recollects Rudolph.

Back at the ruins, they find that the ruins have already been excavated. They find only one fragment remaining. Touching this is enough to make Fiona remember one single name. "Death Saurer".

The episode ends with Prozen giving Raven a brand new type of Zoid, a Zoid with an altered Zoid Core, the Geno Saurer.

Retrieved from "https://zoids.fandom.com/wiki/Zoids:_Chaotic_Century_Episode_20?oldid=63716"
Community content is available under CC-BY-SA unless otherwise noted.