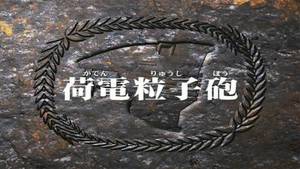 The Charged Particle Gun is the twenty first episode from the anime series Zoids: Chaotic Century based on TOMY's Zoids model franchise.

Raven in his new Zoid is confronted by "Brad's Gang", consisting of a Dark Horn and two Command Wolves. They give Raven no information about Rosso and Rudolph, and he swiftly annihilates them.

Van's group, having left the ruins, is wondering what to do next, and is unsure about the "Death Saurer" Fiona mentioned in the last episode. Accidentally, they uncover Rudolph, not knowing who he is is, and are surprised by his strange mannerisms. Rosso and Viola, fearful for the prince, set out to find Rudolph. Moonbay tries to swindle Rudolph for his royal ring (recognising it as being valuable, but not knowing what the insignia is), but is stopped by Van.

Prozen, using Rudolph's absence as an excuse, sets about usurping the rule of the empire.

Rosso and Viola notice Raven, but he does not stop to battle, instead heading on after a better prey, namely Van. Fiona senses the Geno Saurer's approach, warns them of its approach and faints. In a period of nervous anticipation, they stare into the forest, only to see Viola's Redler fly overhead. They let out a sigh of relief that quickly turns into a gasp of despair as a huge beam of energy splits the sky and shoots down her Zoid. Before they can react, a second beam sends both the Command Wolf and Shield Liger flying, even without a direct hit.

Van fuses with Zeke, and Raven attacks, but Van is able to dodge. Raven introduces himself, and in spite of the Geno Saurer's impressive abilities, Van decides to fight on, attempting to ram Raven with his Zoid's shield. Things go horribly wrong when Raven reveals his Zoid's trump card. The Geno Saurer's feet clamp to the ground. The tail opens up to reveal multiple heat vents and the mouth opens to reveal a barrel. As Moonbay states, the whole Zoid becomes one big gun. Fiona calls for Van to dodge, but the charge has already begun. Van rotates to the side and the beam scores only a glancing blow. Even so, the shot rips straight through Van's shield and smashes past his Zoid's side, shredding its armor and incapacitating it. Raven prepares a second shot, but is interrupted by Rosso's Iron Kong. Raven attacks them with his Zoid's electric claws, which they knock off. They attempt to counterattack, but Raven overpowers them. Van tries to escape and Raven turns after him. Rosso and Viola (who had been picked up and was in the Iron Kong with Rosso) use this chance to grab onto Raven's Zoid. Van and Irvine escape, but Raven electrocutes the Iron Kong, to the point where it ceases to function. Raven, knowing he could catch up, decides to let Van go, giving him a head start so that the chase will be "more fun".