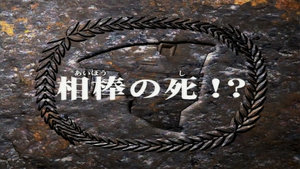 Farewell to a Friend is the twenty second episode from the anime series 'Zoids: Chaotic Century based on TOMY's Zoids model franchise.

After escaping Raven, the group goes to sleep, though in the morning, Rudolph implores them to go to Guygalos. Although Irvine wants more info about the boy, Van agrees. Meanwhile, the Empire sorties the army to look for Rudolph, but their efforts are sabotaged as they are confronted by Raven's Geno Saurer (although they don't know that it was Raven, due to the Geno Saurer being a unique Zoid). Van tries to teach Rudolph how to pilot a Zoid, while Moonbay is enticed by the prospect of milking a reward out of Rudolph (who she believes is rich because of the ring around his neck).

Their journey is interrupted when they come across a ruined Imperial force, and they find Dr. D amongst the destroyed Zoids. He had been following a set of unusual footprints (left by Raven's Zoid). Irvine uses the camera mounted in his eyepatch to replay images of the Gurrill Ruins, which causes Dr. D to mutter the same name Fiona had. "Death Saurer".

He explains that the Death Saurer is a legendary ancient Zoid that was able to kill a thousand Zoids and wipe out an entire nation in a single night. They speculate that the Geno Saurer is some form of resurrected Death Saurer, and Dr. D urges Van to not fight Raven, noting that, like the downed Redlers they are near, any damage to a Zoid's Zoid Core is irreparable and fatal. Through pressure from the gang Van eventually promises not to fight Raven.

Later that night, Van talks with Fiona, who explains that Raven's Zoid did not affect her the way the ruins did, leading her to believe that it is not the Death Saurer. While talking, they see Rudolph sneaking around. He, and Dr. D explain that the downed Zoids are all likely soldiers sent out, and later killed, by Prozen.

They are not alone however and Rudolph is grabbed by Shadow, before Van is surrounded by Rev Raptors. Irvine shows up and helps them escapes, but while he is fighting the Rev Raptors, Raven introduces his Geno Saurer, confirming that is not the Death Saurer, and forces Van to fight him. The Shield Liger is trounced, but Van does not give, and struggles to his feet, once more trying a shield ram. Raven does exactly what he did before, and fires his Charged Particle Cannon.

The Japanese version of this episode features a deleted scene, where Rudolph dreams that he is found, and then killed by Prozen and his soldiers.