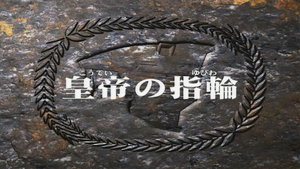 The Imperial Ring is the twenty third episode from the anime series Zoids: Chaotic Century based on TOMY's Zoids model franchise.

Picking up with the ruined Shield Liger and Zeke lying unconscious on the ground, Fiona rushes to Zeke, who opens up, revealing that he had taken Van inside himself, thus saving him. After the battle Raven hands Rudolph over to Prozen's mercenaries, who find that Rudolph does not have his ring, which they need to prove his identity.

Van wakes up and consoles over the injured, but not fatally hurt, Zeke, while the mercenaries contact Irvine and demand that Van trades the ring for the boy. Van and Irvine head off, leaving Moonbay, Fiona and Dr. D to look after Zeke. Van negotiates with the mercenaries, while Irvine launches a sneak attack, letting Van grab Rudolph and escape on his hover board. They are chased and eventually make their way into a mine, which enables Irvine to let off smoke bombs, and they eventually get away from the assassins, but get lost in the process. This gives the mercenaries a chance to find them once again, but Rudolph holds them at bay by threatening to destroy the Imperial Ring, which Van uses to his advantage to escape. Once again, they are cornered, but Irvine saves the day, knocking out their Dark Horns with his Command Wolf.

Meanwhile, a voice calls to Fiona and she is taken in by Zeke, who once again fuses with the remains of the Shield Liger, enveloping it in a strange light. Fiona is brought to a strange, peaceful, place, where she meets an image of herself, and the episode ends.