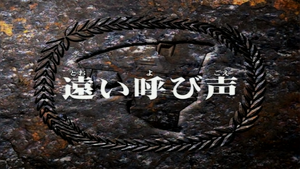 A Voice from Afar is the twenty fourth episode from the anime series Zoids: Chaotic Century based on TOMY's Zoids model franchise.

Van, Rudolph and Irvine, return to camp to find the strange whirling vortex that has enveloped the Shield Liger. Out of it emerges Dr. D, who had entered the light in a protective suit. Moonbay explains that Fiona and Zeke were taken into the light. Van tries to get into the light, but is blasted away whenever he gets close. Enraged by the apparent loss of his friends, Van leaves.

Unbeknownst to them, they are watched by Stinger, a rogue mercenary, who offers his services to Prozen's forces, for a huge price.

Van heads to some nearby ruins, with Rudolph close behind, and recalls his time with Zeke and Fiona. He also laments about loosing his Zoid, Zeke and Fiona, but his down spiritedness causes Rudolph to leave. Irvine picks him up and they head off. Meanwhile, Prozen's men stage a trap, appearing to attack Stinger and drive him toward Moonbay.

Van starts to hear Fiona's voice and heads back to camp. When Irvine returns to camp with Rudolph, he joins in with them for dinner, but is suspicious of Stinger. Van, in a manner similar to the first episode, is attacked by a Guysak to prevent him form getting back to camp, but this one is customised, and is much faster than the one he escaped from in the first episode. Rudolph is cornered by Dark Horns as Stinger poisons Moonbay and Irvine, but as he calls to Van for help, the Shield Liger's cocoon lets of a brilliant glow, and the episode ends.