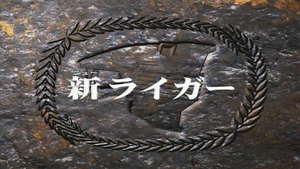 The New Liger is the twenty-fifth episode from the anime series Zoids: Chaotic Century based on TOMY's Zoids model franchise.

Rudolph, Moonbay and Irvine are tied up and left to burn under the desert sun. Van, meanwhile jumps onto the Guysak's canopy and tries to break in, accidentally hitting a button that raises and allows him to steal it. Medlonik (Prozen's hired gun) gets frustrated with Stinger which causes him to reveal that the reason he has not killed the gang is because he wants to get his hands on Zeke. Van engages a Dark Horn, and manages to topple it by attacking it from underneath, before heading back to camp. As Stinger tries to get Zeke out of the light, Dr. D emerges, having been in there the whole time, and, using his protective suit, is able to overpower the mercenaries. The escape is short lived, and once Medlonik gets into his Dark Horn, things start to go awry. Van shows up and engages the Dark Horn, but is overpowered, and even Dr. D's suit shuts down.

Stinger reveals his customised Saber Fang and uses poison gas to incapacitate Van and co, and even Medlonik. He even destroys his own Guysak. Rudolph gets in Irvine's Command Wolf, but is no match for Stinger, as Van struggles to his feet. He gets on his hoverboard and grabs a gun, shooting at Stinger, who uses his missiles to shoot Van. Van is thrown off his board and vanishes into the swirling light.

Here, he talks with Zeke and Fiona as the light fades away, revealing the cockpit of a brand new, resurrected Liger. In a panic Stinger attacks, but fails to harm it, as Van unfolds his new Zoid's blades, cleaving Stinger's Saber in what would later be his signature "Blade Attack". Dr. D dubs this new Zoid the Blade Liger. Irvine and Moonbay recover with an antidote provided by Dr. D, and even Zeke and Fiona return.

Not all is well, however, and Medlonik escapes with Rudolph's ring.