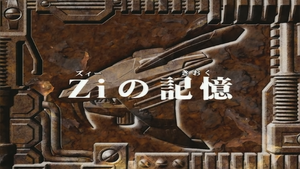 Memories of Zi is the twenty-sixth episode from the anime series Zoids: Chaotic Century based on TOMY's Zoids model franchise.

Prozen is given the Imperial Ring by his assassin, and assumes Rudolph dead, at least outwardly.

Stinger makes his way back to a bar and talks to the "crossbow brothers"- a group of ex mercenaries who have joined the Empire as soldiers. They hear Stinger's story, and head off to search for Van's Organoid.

Meanwhile Dr. D talks to Fiona, who reveals that she is an "Ancient Zoidian"- a race that existed before humans arrived on Zi, one that is now all but dead. She has regained some of her memories after fusing with Zeke, but not all of them, as Van fused with Zeke long before she had a chance to.

Prozen uses the newly retrieved Ring of Guylos to lay claim to the throne, much to the surprise of the other ministers. He takes the throne even before Rudolph's funeral is completed.

Raven, without Shadow, starts attacking a Republican Base. Troops surround him with Gordos, but Raven responds in his usual, brutal manner, and annihilates them all. He then uses his Charged Particle Cannon to destroy the entire base. As the soldiers try to flee using Pteras, Shadow flies up and destroys them, as Raven rips the cores out of the fallen Gordos. These cores are then frozen and taken away by Imperial Gustavs.

Elsewhere, Van's group is attacked by Heldigunners, and Zeke is grabbed by a net. Van and Irvine return fire, and while they fight, Fiona talks to Zeke, who breaks free of his electromagnetic net and fuses with the Blade Liger. The Heldigunners use a formation attack against Van, but Van, undeterred, uses his Blade Attack to take them both out at once.

The episode ends with Prozen placing the Zoid Cores Raven retrieved into a strange pool, but they comment that even this number of cores is not enough.