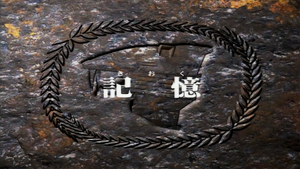 Memory is the third episode from the anime series Zoids: Chaotic Century based on TOMY's Zoids model franchise.

The episode begins with Van and Fiona walking in the desert, the two having become separated from Zeke and the Shield Liger as they went out to search for food due to a sudden sandstorm. They stumble across a Command Wolf, belonging to the mercenary Irvine, who rescues Fiona from a pitfall sand that she fell into. Irvine take them to shelter and gives them some food, while Van explains his situation.

Irvine does not elaborate on his situation, simply saying that he's "looking for something", and leaves while Van and Fiona are sleeping, without giving his name. They shrug it off and return to the Shield Liger. Zeke immediately jumps up and welcomes Fiona back (although he completely ignores Van).

The party stumble across an old military base and are promptly attacked by a white Gordos. Unable to get into his Liger, Van and Fiona instead head inside the ruined base via an old dried-out well. Zeke in the meantime heads off on his own, having been separated from the others when the Gordos attacked. They eventually reunite, as Zeke jumps out of a cupboard and scares Van half to death.

While Van figures out, via an old diary, that the base was abandoned a long time ago, the Gordos was left behind as, due to its damaged leg, it could not be incorporated into the retreat plans. Irvine returns and is attacked by the Gordos, he fights it off, but as Van approaches, he sees Zeke fuse with the Liger, notices it as an Organoid, the thing he was looking for, but, having taken damage himself, he retreats instead of trying to capture it.

After the battle, Van fixes the Gordos as best he can (which isn't much, as he doesn't have any tools), while Fiona finds a pillar with writing on it and remembers the "Zoid Eve". What this is, or why she remembers it, even she doesn't know. The mystery is not solved as Irvine returns and starts shelling the base with a rifle, trying to use Fiona as a hostage to get Van to hand over Zeke, but Zeke saves her and they run for it.

Fiona and Zeke head back out via the well, while Van is pinned by falling debris. The Gordos saves Van, but Fiona and Zeke are ambushed by Irvine. Van takes a heaving beating at the hands of Irvine's Command wolf, but is saved by the Gordos once again. Irvine, reluctant to fight two Zoids at once, retreats. The Gordos returns to it's base, oblivious to the fact that the war had long since ended, and continues to defend the ruins.