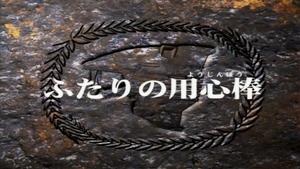 The Protectors is the fourth episode from the anime series Zoids: Chaotic Century based on TOMY's Zoids model franchise.

The episode begins with Fiona throwing out all of Van's water, due to it "smelling funny" (this being due to the fact that Van had added protein supplements to it). Despite this, Fiona finds an oasis (she smelt it) and Van starts swimming around. Irvine shows up (introducing himself this time), explaining that a nearby colony is constantly under attack by ex-soldiers, and he had been hired to protect the civilians.

Van wants to help Irvine protect the colony, but he rejects the offer, and Van storms off. He nearly falls into a hole created through subsidence caused by the depletion of underwater aquifers.

Irvine starts the battle, but instead, Zeke jumps into the lake, causing Van to arrive late. Irvine takes out a Molga, while Van destroys a Guysack. Van is ambushed by a Redler and while he evades, Irvine quickly retreats to see what Van can do. Viola chases him in the Redler, while Van is attacked by two Command Wolves and the Red Horn, piloted by Rosso. Irvine utilizes the terrain in a canyon to leap onto the Redler and down it, while Fiona notices water nearby. Remembering the depleted aquifers, Van asks Fiona to tell him where the water is. He runs over to the location (next to a large rock) and is sent flying by the Red Horn's barrage. However, the attack causes the depleted aquifer underneath to collapse, taking out the two Command Wolves. Irvine returns and finishes off the Red Horn, saving Van (although Van refuses to admit it).

In the original Japanese version, the summary at the start of the episode showed clips of Fiona naked and wrapped in tubes (from episode 1). In the English version, these were replaced with other clips from the same scene: Fiona opening her eyes and Van's shocked face.