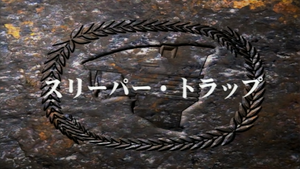 Sleeper Trap is the fifth episode from the anime series Zoids: Chaotic Century based on TOMY's Zoids model franchise.

Van, continuing on his journey, notices some damage to his Shield Liger, while Fiona eats his papaya, much to his anguish. At that moment, a Gustav passes by him, piloted by Moonbay. Irvine watches on from nearby as the two parties set off to make camp nearby. As they talk, they are attacked by a gang of Guysacks, Zeke is unable to fuse with the Liger, and therefore Van cannot put up a fight in his damaged Liger. Irvine shows up and saves Van, and after a brief skirmish, the three pilots make camp in the ruin and while Van and Irvine don't get along, Moonbay and Irvine seem to be old acquaintances.

Also, Moonbay and Irvine explain that the group of Guysacks that attacked them earlier were "sleepers", essentially pre-programmed Zoids that are designed to help out the Republican Army by chasing intruders, that had attacked Moonbay due to her carrying Imperial ammo.

At night, Irvine tries to use an electrical whip to take Zeke, but before he can fight Van for the Organoid, a larger group of sleeper Guysacks arrive and surround the ruins. While Van and Irvine try to protect Moonbay's transporter, Moonbay has other plans, and splits from them. Her escape fails, but Van and Irvine save her yet again. While they manage to defeat a large amount of Guysacks, they run out of ammo before they are able to finish the job. Moonbay decides that survival is more important than keeping her cargo, and dumps it in the ravine, blocking the canyon and allowing the ammo she was carrying to explode and destroy all the Guysacks.

Irvine leaves, but Moonbay demands that Van pay her back for all the lost cargo by becoming her personal "protector", something which he agrees to.