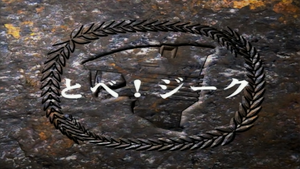 Jump! Zeke! is the sixth episode from the anime series Zoids: Chaotic Century based on TOMY's Zoids model franchise.

Moonbay and the others travel along, when Fiona abruptly stops them. It turned out she stopped to save a grasshopper. As they make camp, a Gordos piloted by Captain Rob Herman comes up to investigate. He had come looking for those who were involved in the sleeper incident. Van spoke up but was questioned when O'Connell realized they had a Shield Liger. He assumed it was stolen from the Republic, but when Van explained the facts behind it, he quickly realized Zeke was an Organoid, and wanted to take him. Van attacked O'Connell, and let Zeke run away. This caused Van and his friends to be put under arrest.

In cells at the Red River base, they run into Irvine, who had run out of ammo, and tried to steal some, which caused him to be locked up as well.

O'Connell analyzed the Shield Liger, and determined the registration had been deleted 20 years ago. Van had been telling the truth. Yet despite the abilities of the Organoid, the Republic forces didn't want to waste resources tracking it.

Moonbay and Irvine reveal that there was a war ready to break out. Soldiers were getting trigger happy, and money was going to either side. At this time, Herman informs Van that his story had checked out, the Shield Liger was his. However, they keep him detained for attacking a military officer. He offered Van a job with the army, which he refused. Moonbay, on the other hand, was more than happy to take up the offer; unfortunately Herman thought she was joking.

Later on, Zeke approached the base. The soldiers didn't want to shoot, knowing how valuable the Organoid was. Because of this, he fused with the Shield Liger, and started to cause havoc. Irvine took advantage of the situation, and used a small explosive hidden in his shoe to break out. However, he only had enough for him and Van, so they left Fiona and Moonbay behind. Van meets up with Zeke, and took control of the Liger. Likewise, Irvine got into his Command Wolf, and the two run off.

Herman uses three Pteras to chase after them. Aside from the fact that close combat against flying Zoids was impossible, both Irvine and Van had no ammo at all. Van then has a bright, yet risky idea. He runs up the canyon wall, and tackles one of the Pteras, knocking it into another. After this, Herman is the last one left. Yet after seeing the attack once, he evaded Van with ease. Irvine then told Van to try the move again, and chased him up the canyon. Van missed, but managed to jump off Irvine's Command Wolf, and defeat Herman. Upon ejecting, Herman spotted the Imperial forces moving across Red River.

O'Connell releases Moonbay and Fiona, but Moonbay is able to overpower him. Moonbay then tries to "make a deal" with him. She signed a contract with O'Connell, to fight against the Imperial forces. Despite their army being three times as large as the Republic's own, she seemed confident.