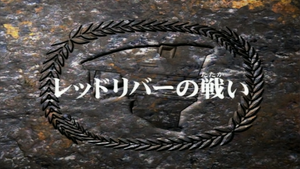 The Battle of Red RiverEdit

The Battle of Red River is the seventh episode from the anime series Zoids: Chaotic Century based on TOMY's Zoids model franchise.

The episode begins with Van and Zeke attempting to rescue Fiona and Moonbay from the Republican Red River Base they had been imprisoned in. However, he was swiftly met with a group of armed guards, led by O'Connell. He revealed Fiona and Moonbay were both free, and now working for the Republic. Moonbay received a large supply of ammunition, which was produced by the Empire.

As they left, Herman revealed their plan to isolate Imperial forces on an island in the Red River, which would surround them.

Schubaltz spoke with minister Prozen, and made it clear he did not want to initiate conflicts with the Republican forces. This did not please Prozen, but after the conversation, Schubaltz revealed he had sworn loyalty to the Emperor, not to "some paper-pushing bureaucrat sitting behind a desk" (Prozen).

Schubaltz got out of his Dark Horn and approached the Republican forces on his own, where Herman met him. Schubaltz asked why Herman had deployed forces into the neutral zone. Herman was quick to reply by asking the same question back. Herman made it clear they were only acting because the Imperial forces were there, and that they were establishing a line of defense against possible invasion. Schubaltz responded by saying they were only conducting military exercises, with no intention of launching an attack.

This led to a stand-off between the two forces.

As the stand-off continued, Prozen met with Marcus, offering him a promotion in favor of Schubaltz. Marcus contacted Rosso and Viola, giving them a Republican Pteras. They were advised to attack the Imperial forces, as a trigger to end the cease fire.

Moonbay arrived at the base, and left the explosives on Fire Bridge. However, due to the stand-off, she was instructed to wait longer than originally planned. She faked a breakdown, and since she was on the Imperial side (who had no mechanics who knew about Gustavs), could do nothing to repair it. They were intending to destroy her Zoid, but when they learned she had their ammunition on board, they realized this wasn't an option.

It was nearly nightfall when Viola arrived and attacked as planned. The Imperial forces spotted the Pteras, and assumed it was a Republican attack. However, the Republicans noticed the Pteras had flown behind enemy lines, meaning it was an Imperial attack.

Schubaltz figured out that Prozen was behind the attack, but was left with no other options, he initiated the attack. This left the Republican forces severely outnumbered.

Moonbay attempted to destroy the bridge, but the detonator failed to work, blaming it on Republican manufactoring. This caused several Imperial Troops to surround her and Fiona with guns.

With no other option, Herman instructed Van to jump across the river and do the job himself. Van had previously destroyed all the Pteras, so there was no option to fly across. Van was left to jump the 300 meter chasm in his Shield Liger. Irvine met him at the top, and detonated part of the cliff.

The rock ledge gave him a head start, but Van was left to jump the rest of the way on his own. He made the jump, and rescued Moonbay and Fiona, detonating the ammunition with the Liger's cannons in the process.

Schubaltz learned of the situation and ordered a full retreat. He knew with their supply lines cut off, and Republican reinforcements on the way, a retreat was in order. As the Imperial Army retreated, Shubaltz passed by Van's Shield Liger without firing a shot, much to Van's and the other's confusion. He, however, secretly thanked Van for his intervention and planned to one day battle with Van one-on-one, smiling as he did so.

Retrieved from "https://zoids.fandom.com/wiki/Zoids:_Chaotic_Century_Episode_7?oldid=63064"
Community content is available under CC-BY-SA unless otherwise noted.