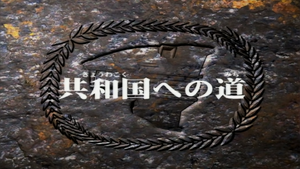 The Road to the Republic[]

The Road to the Republic is the eighth episode from the anime series Zoids: Chaotic Century based on TOMY's Zoids model franchise.

The episode begins with Rosso and Viola being betrayed by Marcus. In the previous episode, he had ordered them to attack their forces in a Republican Pteras so that they could break a stalemate. However, Marcus reneged on his offer to let them rejoin the Imperial army. With no other alternative left, Rosso mobilized his men to capture Zeke. He intended on avoiding a Zoid battle.

Back with Van, Herman advised he had never heard of the Zoid Eve. Irvine attempted to steal Zeke, but didn't make it far. They then proceeded to head to the Republican capital in search of further clues.

After a week's voyage they arrived in the Sand Colony, Moonbay convinced the others to reside in a hotel. Irvine made the observation that Zeke could leave Van if he felt like it, which caused Van to overreact.

While shopping for supplies, Moonbay and Van were confronted by the desert gang. They made it back to the Gustav, only to be headed off by Rosso and Viola in a Redler and a Pteras.

Fiona and Irvine spotted Van and Moonbay, but were unable to use Zeke to rescue them since they were tied to the Shield Liger's leg. Fiona seemed like she had a plan to untie them, but she simply walked up to the gang in an air-headed attempt to untie them. She was promptly captured, but proved enough of a distraction for Irvine to release them. Zeke promptly fused with the Shield Liger.

Van was confronted by a Red Horn, with Irvine kept busy with the Pteras and Redler. Van faced the heavy shelling of the Red Horn, and his own weapons proved of little use against his opponents tough armor. It seemed Van was done for, when Rosso released a volley of heavy shelling. However, the liger set up its signature shield.

Rosso was hit with a shield ram, but fought back. He broke the Liger's barrier with a powerful charge from his Red Horn. Before the finishing blows could be dealt, the Imperial army showed up.

Rosso disbanded his gang. Realizing that the forces were after him alone (he was a scapegoat for the failure at Red River).