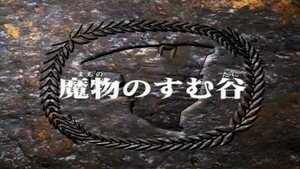 The Valley of the Monster[]

The Valley of the Monster is the ninth episode from the anime series Zoids: Chaotic Century based on TOMY's Zoids model franchise.

The episode starts with Van and co. fleeing an assault from Imperial forces, who had launched an opportunistic attack on them simply because they happened to be in Republican territory (and thus presumed to be Republican). Van, Zeke, and Irvine turn and attack the enemy Molgas, although they have trouble with the evasive abilities of their foes and only manage to defeat one before the Molgas retreat. It is soon discovered that the valley they are in is emitting a electrical pulse called the Rare Hertz, a strange wave that moves around randomly and causes Zoids to go crazy. This was causing Van's Liger's sights to be off and also caused the army to retreat in the earlier battle. They activate their Zoid's "pulse guards", which offer at least momentary protection, but Zeke has no such defense, thus collapses, lowering their firepower and forcing them to go further into the Valley, as, without Zeke, they know they don't stand a chance against the army.

Zeke's collapse is only momentary, and he quickly wakes up, only to go berserk, attacking Van and the Gustav before fusing with the Shield Liger, attacking Irvine's Command Wolf and fleeing further down the Valley. After a confrontation with Irvine, Van sets off after Zeke and the Shield Liger on foot. He nearly finds them, but falls off a cliff and is helped by Fiona and the two of them resume searching, eventually finding Zeke, who is still enraged and once again fuses with the Liger and attacks Van. Van stands his ground and Zeke, rather than finishing Van off, hesitates and flees once more, but Irvine buries the Liger in an avalanche, before they the group set off after Zeke on hoverboards. Zeke is quickly cornered and once again confronts Van, in a fashion similar to how they first met. Zeke once again hesitates, and nearly falls off a cliff, but is caught by Van, who only manages to hold on for a little while before they both fall off the cliff. Zeke regains his senses and uses his jets to fling Van and Zeke back to safety and everything is returned to normal... save for the still-buried Shield Liger.