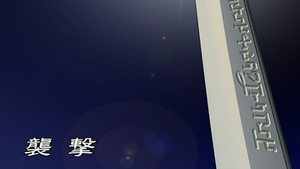 Raid is the first episode from the anime series Zoids: Genesis based on TOMY's Zoids model franchise.

This episode begins in Ruuji's hometown of Mirodo Village, where an ancient Zoid is discovered underwater, a large-scale Liger-type. They raise it to the surface using large sacks of air, which they inflate from a floating rig.

In the village itself, Ruuji's family prey to their ancestors, in a shrine built around a large shining metal pillar, before heading off to inspect the newly retrieved Liger. The villagers immediately set to work cleaning it up. They comment on its size, one villager even believing it to be the biggest Zoid in the world.

They take a break, and over lunch they talk about a war that had supposedly started. Ruuji's father comments that "Digald" (the name of the country) has nothing to do with their remote village, and if their "Silver Zoids" show up, he will fight in the village's Beam Tortoise.

Elsewhere, Rei Mii catches fish and sets about barbecuing them, but before she can eat, she hears a series of explosions heading toward the village and rushes off.

The villages clean the Liger enough to get it working, and fill it with Reggel (a Zoid's fuel source) and its cockpit opens, still in remarkably good condition. Ruuji's father tries to operate it, but it does not start, him not being "the right one". One by one, the others try to start it, and they confine themselves to just selling it. Ruuji is encouraged to try out, but he gives up without trying, knowing that he's never been able to get even small-scale Zoids to work.

They pull it to land, where they notice that the village is on fire, and is under attack from several Bio Raptors. Ruuji's father quickly runs to his Beam Tortoise, while some of the other villagers pilot the smaller Baratz Zoids. The Beam Tortoise is quickly overpowered, as are the Baratz. Ruuji's father powers up his Zoid's gun, and fires its laser cannon. He initially misses, but when he corrects his aim, he finds that even its large-scale gun has absolutely no effect on the Bio Raptor's armour.

The villagers prey, while Ruuji tells the rest of his family to evacuate. The Bio zoids, having defeated the Beam Tortoise, head to attack the Murasame Liger. Ruuji tries to close the cockpit and is thrown in by the Bio Zoid's attack. As soon as he is inside, the cockpit shuts and the Zoid activates. Although it is attacked by the Bio Zoids, it is not destroyed, and Ruuji grabs the controls, activating the Liger, tackling and throwing a Bio Zoid. Ruuji then settles on its name, "Murasame Liger". He is quickly blasted back into the ocean and starts sinking back down to the seafloor it had just been pulled from. But as it falls, the Village's shrine glows and a symbol appears in the middle of the console.

The Bio Raptor forces, knowing the Zoid cannot fight without a weapon, notice the shrine and move to destroy it. Ruuji leaps out of the water and the metal pillar in the shrine flies out of the building, connects to the Murasame Liger, and allows Ruuji to slice a Bio Raptor in half.

It is then that the Sword Wolf and Lanstag appear. They charge in from a cliff behind Ruuji as the Bio Zoids approach from the front, and the episode ends.