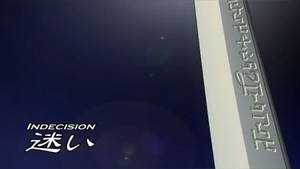 Hesitation an episode from the anime series Zoids: Genesis based on TOMY's Zoids model franchise.

Picking up where the last left off, with the Soul Tiger saving Ruuji from the wild Elephanders. The pilot calls Ruuji a fool, but takes him back to his place, so that Ruuji won't be attacked by any more Wild Zoids.

Back at the village, Ra Kan decides not to head out and look for Ruuji, fearing a Digald ambush, and they are left hoping for the best. Ron explains what Wild Zoids are. He states that they are pilotless Zoids (or rather, Zoids with pilots who have died), who move around on their own. Any kind of Zoid can become one. They search for Reggel, which can be found naturally near hot springs or volcanoes, albeit in lower quality. This is what the Wild Zoids feed off.

Ruuji learns this as well, as the man he is with uses the Reggel to power his Soul Tiger. In the morning, Kotona sets off to find Ruuji. She spots the Liger and instantly recognises the man he's with. She explains that he, Seijuurou, is the greatest Zoid pilot in history. She explains that in Kaguraku, where she had lived for a period of time, there were many large-scale Zoid tournaments, tournaments which Seijurrou had won ten times in a row.

Ruuji begs to have Seijuurou teach him how to pilot a Zoid, but he refuses. Galaga heads off to find Kotona, but on the way, Ron notices that a Wild Zoid feeding ground had been covered by an avalanche. Seijuurou meanwhile is distressed by memories triggered by Ruuji's request. Kotona talks to him, and urges him that the death of his past student, a boy killed by Seijuurou in a accident in one of the tournaments he won. Ruuji interrupts their conversation. He apologizes for not considering Seijuurou's situation, but literally begs him to help him protect his village, either in person, or by telling him of someone else who would be able to fill the job.

He never replies, as they notice that the Wild Zoids are once again on the move, charging for the village's Generator. Ra Kan and Rei Mii are the only ones still at the village, and are left facing an overwhelming number of Wild Zoids. Seijuurou is left behind as the others head off to fight the Wild Zoids. But he doesn't stay behind for long, and arrives to help chase away the Wild Zoid, a feat he quickly accomplishes.

But he rejects Ruuji's proposal, insisting that the only one to protect his village is Ruuji himself. But he quickly clarifies his intent: to train Ruuji to become strong enough to fill this role.