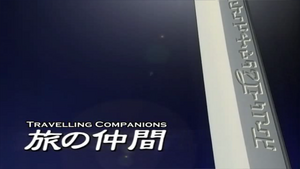 Travelling Companions an episode from the anime series Zoids: Genesis based on TOMY's Zoids model franchise.

Back with the mechanic Jingo, Ruuji and co. find out that the Generator mechanic had indeed been a customer, and he had hailed from the town of Ze Ruft, a mining town. The Generator mechanic, Ferde, was their next lead, even though it was only a passing comment that had clued Jingo into the man's occupation.

They head out to the mountains, seeking to evade Digald's patrols by not taking the usual routes. Seijuurou starts training Ruuji by forcing him to carry the Soul Tiger on his Liger's back as he walks.

Meanwhile, Zairin heads to the heavily industrialised city of Digu, capital of Digald. Here, he meets with General Jiin, an old friend of his. Zairin is offered some leave by the General, while George, another high-ranking officer, is given the task of defeating Ra Kan's (and Ruuji) forces. He is nonetheless displeased, wanting to settle things with Ruuji personally.

While crossing the mountains, Ruuji takes turns watching, first with Mii, who attacks him when he implies that all she can cook is barbecue, and then by Galaga, who is enraged when Ruuji implies that he wants to marry Kotona. All through the night, Ruuji continues with his exercises, as part of Seijuurou's training.

The next day, they set out again, but not only is Ruuji forced to carry the Soul Tiger, but the Rainbow Jerk as well. This is not only to train him, but also because the Rainbow Jerk uses a lot of Reggel while flying, so having him carry her is a more efficient way to travel.

On their way up the mountain, they pass through a snowy track of land, and is the first time Ruuji has ever seen snow. They camp out in a cave as a snowstorm, and Rei Mii falls ill. Ruuji heads off, and Seijuurou follows him, helping him in the perilous search for a plant that will help cure her. He finds it hanging off the edge of a cliff, but is able to grab it, even as the cliff crumbles under the weight of his Zoid.

The episode ends with the group having successfully cured Rei Mii and passing through the mountain pass.