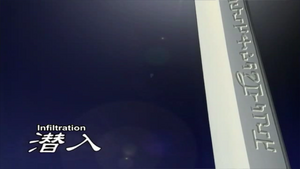 Infiltration an episode from the anime series Zoids: Genesis based on TOMY's Zoids model franchise.

The episode begins with Digald laying siege to a heavily fortified city. Their heavy guns and Bio Raptors make short work of the enemy's Molgas, but cannot advance past the city's wall. However, the emergence of the Bio Tricera changes that, and it is able to smash right through the city's main gate.

Ruuji and co. arrive in the nearby countryside some three days later, only to find Digald finishing off some one of Ze Ruft's retreating forces. Even though the pursuing Bio Raptors are defeated by Ruuji and co, they are unable to save him, as his badly damaged Molga explodes anyway.

Desperate to follow through on his only lead on the Generator Mechanic, they survey the city, only to find it crawling with Digald forces. Kotona decides to head in, her being the group's best bet at infiltrating the city. Ruuji is told not to go, but heads off anyway. The group catch him, but as he pleas with them, they change their minds and agree let him (along with Seijuurou) join Kotona's infiltration of the city.

Meanwhile, Digald holds the city to ransom, but are informed of the disappearance of two Bio Raptors. George does not send out a search party, but tells his forces to remain vigilant nonetheless.

Ra Kan takes Seijuurou, while Rei Mii takes Ruuji and Kotona. They drop off the infiltration party, but are discovered by Digald Patrols, and are attacked by Bio Raptors. This creates a disturbance and gives Ruuji and co. a chance to enter Ze Ruft. George is informed of Ra Kan's presence, and heads off in his Bio Tricera. George proves to be an extremely capable opponent, and neither Rei Mii nor Ra Kan are able to land a hit on him. It is only when Ron and Galaga show up that the tables are turned, but rather than gang up on him, the Bamburian simply fires smoke missiles and the group retreats.

Ruuji, Kotona and Seijuurou manage to get into the city, where they steal some clothes in order to blend in (although they do leave some money behind) and send Kotona's bird back with a message to Ra Kan, and continue on their mission.