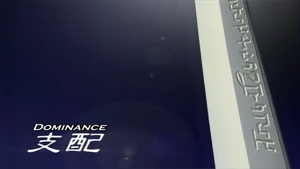 Control an episode from the anime series Zoids: Genesis based on TOMY's Zoids model franchise.

Ruuji, Kotona and Seijuurou are herded into a Digald processing camp, along with the rest of the townsfolk. George harasses the mayor, who tries to stand up for the citizens, and threatens to kill him. Ruuji gets in the way, and George moves to kill him first. Seijuurou intervenes, beating up the George-defiant Ruuji, shortening the Digald officer's temper. He dismisses them, and the processing continues.

This processing is used to determine who among the the citizens are able to pilot a Zoid, by placing their hands on a rock, which glows if the person touching it is a person capable of piloting a Zoid. Ruuji is not one of them, and is therefore separated from Seijuurou and Kotona.

He is taken to a labour camp, along with the Mayor he saved, where they are forced to work in the town's mines. Meanwhile, Kotona and Seijuurou are separated and put into training to become soldiers of Digald. The villagers a shocked to see Digald's incredibly industrious use of resources, and have industrialised the mountainside in only a space of a few days.

Ruuji inspires the villagers with his hard work, doing the work for both himself and for the mayor, so as to give the elderly man a chance to rest. That night, he escapes from his confinement with the help of Rune, an orphan that he befriends while in captivity, and he converses with Kotona and Seijuurou, though none of them are able to find the Generator mechanic.

They send another message to Ra Kan and the others, but as they read it, the Ze Ruft defence forces lead an attack to reclaim the city. The deployment of the Bio Tricera swiftly ends this rebellion, and Ze Ruft's Molgas are given no reprieve, with even the retreating forces being utterly annihilated.

Retrieved from "https://zoids.fandom.com/wiki/Zoids:_Genesis_Episode_13?oldid=62485"
Community content is available under CC-BY-SA unless otherwise noted.