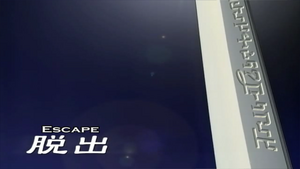 Escape an episode from the anime series Zoids: Genesis based on TOMY's Zoids model franchise.

Still in confinement in Ze Ruft, Ruuji resumes his work in forced labour, on the way witnessing the ruins of the battle that had occurred the night before. Ra Kan and the others continue waiting for word from Ruuji. Ra Kan is especially effected by the failed raid. He knows the attack was unsuccessful, but is nonetheless hung up on the fact that they actually made a stand against Digald.

Inside the city, the laborers are treated extremely poorly, and even though one of them becomes too ill to work, their workload does not decrease, rather, it stays the same, and the threat of going without food is leveled at the prisoners if they fail to meet their assigned tasks. Ruuji inspires them with words of support, and the citizens rally behind him to get the job done. Meanwhile, Kotona and Seijuurou are put through training as soldiers, a job just as strenuous as the laborers.

That night, Ruuji tries to get outside again, but is spotted by the ex-mayor, who, being familiar with the town, knows he's not from Ze Ruft. The two converse and Ruuji explains his purpose for being in the town. The mayor confirms that Ferde was the Generator mechanic and is indeed in Ze Ruft, and Ruuji enthusiastically meets up with Kotona and Seijuurou. They head off to the northern part of town in search of the mechanic. Here, Ruuji is informed that Ferde used to be there, but had been taken to Digald's headquarters, due to his reputation as a skilled mechanic.

A prisoner overhears this conversation, and confronts the group. He reveals himself as Aotasu, an ex-member of Ze Ruft's forces, who had been planning an attack on Digald headquarters. He is aware of the fact that a frontal assault would be suicidal, but knows of many underground tunnels that would allow them to infiltrate the city in their Molgas, attack Digald's headquarters, and kill Georg, disrupting their chain of command. This, he believes will be enough to enable them to take the city back. He declines help from Ruuji's friends, wishing to take his city back with his own hands, but nonetheless knows that this would give Ruuji's friends a chance to get Ferde out of Digald's headquarters.

Ruuji is dismayed to learn that his enthusiasm has resulted in Digald raising the required workload, while Kotona is taught the basics of Bio Raptor control. That night, the plan goes ahead, but with a much greater sense of urgency- a massive army is being sent by Digald, and thus, Ruuji and his friends will loose their chance to escape if that main force arrives.

The attack commences, and Ra Kan, Rei Mii and Galaga use that to head into the city from the outside. The Molgas are unable to kill Georg quickly, as he escapes thanks to a grappling hook contained in the contraption housed in his arm. He hijacks a Molga and uses it to surprise the Ze Ruft forces, annihilating a significant portion of them, before he is mistakenly attacked by one of his own men. Meanwhile, Kotona is able to force a Digald officer to take them to Ferde, only to find that he had died within the last two days, much to Ruuji's dismay.

The officer escapes and sounds the alarm, but the wall is blown down by the battle outside, and Ruuji is given a chance to meet up with Ra Kan and escape, although not before seeing Aotasu die in the conflict.

Retrieved from "https://zoids.fandom.com/wiki/Zoids:_Genesis_Episode_14?oldid=62487"
Community content is available under CC-BY-SA unless otherwise noted.