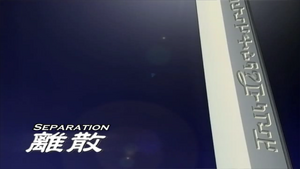 Dispersal is an episode from the anime series Zoids: Genesis based on TOMY's Zoids model franchise.

Knowing that Ra Kan's group has Metal Zi weapons, Georg takes no chances and pulls out the entire contingent of Bio Raptors to give chase. Ruuji, however, does not give up on the people of Ze Ruft. Even knowing that there were no more Generator mechanics in the city, he is dismayed by Digald's oppressive rein, and wants to help them. Ron reminds him of his goal, to find a Generator mechanic, and that this is the only reason Ra Kan, Rei Mii, Kotona and Galaga are travelling with him in the first place. He also reminds Ruuji that Ze Ruft is not the only city to be occupied by Digald, and that just because they weren't with him while he was in the city doesn't mean they don't know what Digald is like.

Elsewhere, Georg pulls even more troops from the main Digald force, leaving both their supply lines and Ze Ruft completely undefended. Ra Kan talks to Ruuji, telling him of their next destination, but Ruuji simply asks him if he would want to save a city that had been occupied by Digald. The answer he gets is simply that there is only so much one person can do. Ruuji rejects this as an answer and demands to know why Ra Kan refuses to stand up to Digald, despite being able to combat the Bio Zoid threat. This enrages Mii, who attacks the naive Ruuji, who has unknowingly tread on ground that is of great personal significance to Ra Kan (and herself).

Later, Ruuji leaves the camp, but is spotted by Galaga, who was on lookout duty. But rather than stopping him, Galaga joins him, agreeing that he simply cannot let Digald get away with occupying another city, like the one he used to live in. He had gone travelling for nearly two years, only to return and find it crawling with Bio Zoids. He tried to fight them off, but was defeated, and was barely able to escape successfully. In order to gather more power and take the town back, he had set up the ill-fated resistance group. While they head for Ze Ruft, Bio Zoids spot the Lanstag's tracks, and head toward the group.

Ruuji and Galaga arrive in Ze Zuft, only to find it defenceless. They head in, but not before Galaga makes Ruuji promise to give up on the citizens and run if he cannot free them successfully.

But as they enter the city, the others are surrounded, and, lacking a lookout, are set upon by Bio Zoids. Fortunately they are in their Zoid's cockpits, and though they are bombarded, are able to quickly move to counterattack

Ruuji greets the townsfolk, but the reunion is short-lived, as even without a Bio Raptor squad protecting them, they have no way of moving that many people, nor do they have anywhere to do to eve if they do flee. Thus, Ruuji is forced to leave empty-handed.

It is only then that they notice the forest is ablaze, and they run to help their comrades.

The group struggle, but are grossly outnumbered. Ruuji blames himself for going to the city, while Galaga blames himself for abandoning the watch. Ruuji runs on ahead, as the fight continues. Georg pay no need to his own comrades, and does his all to divide Ruuji's group. Even with Ron's Bamburian firing all it's Metal-Zi missiles, they are outnumbered and overpowered, and forced to retreat.

By the time Ruuji arrives, there is naught left but smoldering ashes, and he is left alone, separated even from Galaga. He heads west, hoping that this would be where everyone else was headed too. As he traverses the countryside, he is called to a halt by a group who surround him in with multi-coloured Baratz.