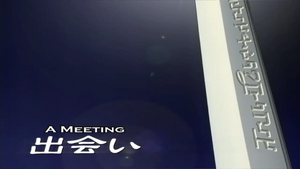 Encounter an episode from the anime series Zoids: Genesis based on TOMY's Zoids model franchise.

Picking up where the last left off, Ruuji finds himself face to face with a squad of Baratz Zoids. One of the pilots, a female, gets out of her Zoid and demands to know Ruuji's affiliation with Digald, warning him that the incorrect answer will not be taken lightly. Ruuji angrily shouts his hatred for Digald, and the mood suddenly shifts, as the woman proclaims him to be their comrade, and introduces her group, the "Tenka Muteki no Muteki-Dan" (roughly equivalent to something like the "Heavenly, Invincible, team Invincible").

The woman's name is "A Kan", which is obviously extremely similar to "Ra Kan" (a mistake Ruuji initially makes, but is quickly corrected). The others introduce themselves as Ra Muu, Gotoshi (nicknamed Go-Chan), Furi Ten and Saiko. Ruuji introduces himself, and Muteki-Dan continue their absurd introduction, striking extravagant poses as they explain that they are an anti-Digald force. Ruuji is taken in by them, and over dinner they reveal that their objective is simply, to steal supplies from Digald, and, bit-by-bit, ruin their empire. They also reveal that, even though they use naught but Baratz, they have never been defeated by Digald, and are invincible in more than name.

Ruuji tells them more about himself, and the comrades he had gathered, as well as the tragic recent turn of events. When his flashback ends, he finds Muteki-Dan in tears, bawling over his heartbreaking tale. They promise to help him, even though they know nothing of his friends or Generator mechanics.

The next day they head out, attempting to fulfill the promise they made the night before. Ruuji is confident that they should be nearby, as their Reggel supply is limited. But it is not him who finds them, rather they stumble across a wandering Galaga, and using their Baratz to communicate and approach him as a group. Not knowing who he is, they approach him in much the same provocative way that they did with Ruuji. They introduce themselves as "Digald..." and would presumably have gone on to add something like "...resistance forces", but Galaga is not as patient as Ruuji, and he launches and all-out assault with his Deadly Kong.

Eventually, the misunderstanding is cleared up and Galaga is able to meet up with Ruuji back at Muteki-Dan's camp, although not before he accidentally beat them up first. Galaga is also recruited by Muteki-Dan, and Muteki-Dan, riding a high, decide to attack a Digald supply line, but refuse to put Ruuji and Galaga, their new recruits, in danger, and promise to take care of it themselves. Despite their eccentricities (such as constantly pulling absurd poses), Ruuji and Galaga like the ragtag team, and go along with them to see how the earned their invincible name with nothing but Baratz.

The attack is a brazen one, with A Kan jumping out in front of Digald and opening her cockpit. The Digald forces respond in the same manner, but level their guns at her. Unintimidated, A Kan simply shouts "Hey! What's that?!", and in that moment of distraction, Muteki-Dan ambush and easily defeat Digald's supply line. But things start to go awry when two Bio Raptors show up. Muteki Dan try and run away, but are outpaced by the superior Bio Raptors. Thanks to their new recruits, and the Metal Zi weapons they posses, Muteki-Dan is saved.

Once again victorious, Muteki-Dan throw a feast, and although Ruuji is still downbeat about Ze Ruft, he is told by Galaga to just enjoy the moment, advice he promptly takes, and joins in on the celebrations.

Retrieved from "https://zoids.fandom.com/wiki/Zoids:_Genesis_Episode_16?oldid=62489"
Community content is available under CC-BY-SA unless otherwise noted.