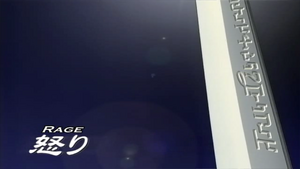 Rage an episode from the anime series Zoids: Genesis based on TOMY's Zoids model franchise.

Ra Muu talks with Ruuji, (who she now dubs "brother", similar to how she refers to A Kan as "sister") and reveals that her village had been wiped out by Digald, not even one other person had survived. Due to her being alone, she had been forced to eat roots, which tasted horrible, but, thanks to this, she became an excellent cook, and ended up making them edible. A Kan eventually found her and let her join Muteki-Dan (although is was, at the time, Muteki "just one person", as Muu was the first recruit). Later, Go-Chan, Ten and Saiko (in that order) joined the group, each having been oppressed by Digald, and thus, fight against them in the only way they know how, slowly, steadily, and never against opponents they can't win against (hence their "invincible" reputation).

Saiko brings back intelligence from a nearby city, and the group decides to attack a large Digald supply unit said to be heading through the area. They do no further research, which concerns Ruuji and Galaga. They know that Muteki-Dan's bit-by-bit strategy will eventually have an effect on Digald, but also know that their recklessness will probably get them all killed, in much the same way Galaga's group was. Despite this, or perhaps because of this, Ruuji and Galaga know they simply cannot abandon Muteki-Dan, even though they know they have to hurry and find Ra Kan and co.

Their concerns are well-placed, because when Muteki-Dan starts their operation, it is not supplies, but rather Bio Zoids, that come out of the Digald convoy. Ten's Baratz is quickly annihilated. Enraged, Galaga charges in, but is outnumbered. Ruuji and A Kan try to help, but are also overwhelmed. Ra Muu is the next to fall, her Baratz tackling a Bio Raptor in order to save A Kan, but explodes as both of them fall off a cliff. This does defeat the Bio Raptor, but Ra Muu is thrown from her Zoid. A Kan rushes to help her, but as the two speak, Ra Muu's energy fails, and she collapses in A Kan's hands. Saiko's Baratz is also destroyed, and she suicidally charges a Bio Raptor with naught but her bamboo blade. After slicing the sword in two, she too is taken out by the silver Zoid.

Galaga and Gotochi fight off Digald, but her Baratz dives in front of a fireball headed for the Deadly Kong, and she collapses, only to be engulfed by the explosion of her yellow Zoid. Ruuji and A Kan move to help the surrounded Galaga. A Kan charges first, and although she is shot, she charges into a Bio Raptor and engulfs it with her Zoid's explosion. Ruuji tries to stop her, but as he does so, a Bio Raptor tackles him and knocks him off a cliff, into the mountain's steaming crater.

This leaves Galaga alone. Still outnumbered, he mourns for his fallen comrades before resolving to have his revenge. Believing no-one but Digald is still alive in the area, he grabs his Zoid's bandaged arm and rips it off. Removing the seal, he reveals that his Zoid's left hand is covered by a massive Metal-Zi claw, that allows him to slaughter the Bio Raptors.

However, Ruuji is in fact not dead, and climbs back up the mountain to see Digald massacring even the retreating Digald forces. However, Deadly Kong turns on him too, the removal of the sealed weapon causes the Zoid to go berserk, destroying everything until either there is nothing left, friend or foe, or it runs out of Reggel. But Ruuji opens his Zoid's cockpit and pleads with the Deadly Kong to listen to him. Mere inches from Ruuji, the Zoid responds to Ruuji's feelings and shuts itself down.

Galaga and Ruuji resolve to find Ra Kan and thus wipe away the tears shed for the fallen Muteki-Dan and head off in the dusk.

But Muteki-Dan aren't actually dead. A Kan's Zoid had exploded, but was still in one piece, and A Kan was therefore sill alive. Muu had simply fallen asleep earlier, having stayed up all night last night due to over-excitement. The others had likewise not been killed. They note Ruuji and Galaga are nowhere to be seen, but know they're still alive, and resolve to continue their bit-by-bit assault of Digald until they are one day reunited.