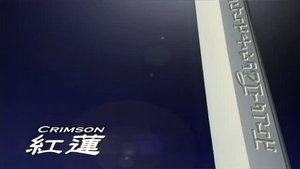 Crimson an episode from the anime series Zoids: Genesis based on TOMY's Zoids model franchise.

Georg, having rapidly made a complete recovery, hears of the loss of two Bio Raptors and uses that to guess as to Ra Kan's location. As with before, he pulls out all forces from Ze Ruft and uses them as reinforcements to fight Ra Kan with.

Meanwhile Ra Kan prepares to leave the village, even though Ron has yet to meet up with the rest of them. The villages urge them not to leave, fearful of Digald blaming them for letting Ra Kan's group escape, but Ra Kan simply tells them that if they term his group thieves, raiding their village for Reggel, then they should have no more problems with Digald. This is a false assertion, as Georg lays waste to the village anyway. The fires attract the group's attention, and they note, much to their surprise, that Georg is still alive.

Ruuji is enraged by this and rushes to the village's aid. The others, though more hesitant, follow him back to the village. Ruuji engages Georg first, but is thrown, and Ra Kan once again locks Georg into a duel. Ra Kan, still injured, is helped by Ruuji, while the others take out the Bio Raptors. They are caught off guard when Georg uses his Zoid's extendible horns, and both are outmatched by the one Zoid.

Ra Kan is backed into a corner, and Georg moves in for the final blow, but as he approaches, Ruuji's Zoid explodes into flames and races across the land, slicing off Georg's Zoid's horn. The attack is unrelenting, and Ruuji is able to slice the Tricera to bits, the flaming wreckage falling off the cliff and meeting the end that was intended for Ra Kan.

With this new red Liger standing before the group, the episode ends.