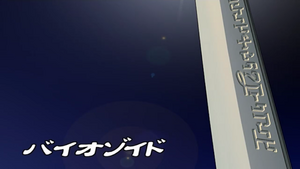 Bio Zoid an episode from the anime series Zoids: Genesis based on TOMY's Zoids model franchise.

Picking up where the last episode left off, Ruuji is caught between the oncoming Sword Wolf and Lanstag, and the Digald Bio Raptors. As the former charge at him, he prepares to attack them, but they just jump over him and plow into the Bio Raptor squad, quickly destroying all three. Ruuji is still confused as to whether the two newcomers are allies or not, but they quickly set about putting the fires out, revealing they really are allies.

After the fires are put out, the villagers are surprised to learn that Ruuji was piloting the Liger. Rei Mii and Ra Kan get out of their Zoids (Lanstag and Sword Wolf respectively), and although Rei Mii confronts Ruuji about his amateur piloting skills, Ra Kan calms her down and sets about explaining why the Bio Zoids had attacked the village. He tells the villagers that the Zoid fuel, Reggel, is highly desired by Digald, and that the Bio Zoids are immune to both laser and normal munitions, and only "Leo" based weapons are able to combat them effectively.

Elsewhere, Zairin attacks and secures a generator with his Bio Megaraptor and a squad of Bio Raptors. He notes that four of their soldiers are missing and sets to find them. On his way, he is attacked by ten Elephanders. Seeking fame for defeating a Bio Zoid, they attack, but their weapons have no effect, and the Megaraptor is able to swiftly annihilate them.

Zairin stumbles across the village and heads into town under the guise of a travelling merchant, in order to figure out how four Bio Zoids were able to be defeated.

Ruuji talks to Ra Kan, and eventually bumps into Zairin, immediately noting that he has books for sale. Ruuji, in his enthusiasm, grabs the book, absently walking off with it. Zairin sees Ra Kan, immediately recognizes him and tries to assassinate him. It is then that four more Bio Zoids appear. Rei Mii fights off Zairin, who introduced himself and gives Ruuji the book before fleeing the burning village.

Ra Kan, Rei Mii and Ruuji get into their Zoids and set off to fight the invading Bio Zoids. Ra Kan and Rei Mii are outnumbered, and Ruuji is unable to lend assistance, due to his relatively low piloting skill. Zairin pins the two with his comrades and sets them alight, before charging Ruuji. There, the episode ends.