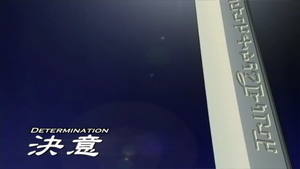 Determination an episode from the anime series Zoids: Genesis based on TOMY's Zoids model franchise.

After the battle, Bio Raptor scouts arrive at Pikuru, but leave after confirming the destruction of the Bio Tricera and its associated Bio Raptor forces.

Hopeful that they won't return, Ra Kan and the others begin rebuilding the village. They use their Zoids to do most of the heavy labour, such as moving resources and clearing debris, and, thanks to that, are able get the work done quite rapidly.

Over lunch, they speculate about the Hayate Liger's origins, not knowing what caused it to change, nor what caused it to revert back. They joke about it eating bad food, but without any real information, and without Ron to offer his insight, they come to no conclusions, other than on the name, which Ruuji confirms as "Hayate".

Ruuji takes some of the children around the village, where he is given quite a lot of gifts from the thankful villagers. He ends up talking with some of the older men in the village, who thank Ruuji's group for their assistance, but comment that even with their victory, and the rebuilding of the village, that they will simply not be safe so long as Digald maintain their warlike tendencies. This strikes a cord with Ruuji, who realizes that as soon as his group leaves, the village will be defenseless. He thinks about it, to the extent that when the group decide to head out to the next big city to look for a Generator mechanic, that instead they should be fighting against Digald, as they have many large-scale, Metal-Zi-equipped Zoids. This doesn't sit well with the group, and when Ruuji asks for Ra Kan to become the group's leader, he reminisces and tells Ruuji a "story" .

He talks of a country called "Kira", which, while not large, was prosperous thanks to a rich textile and agricultural industry. They had many large-scale Zoids, and may have been able to defeat Digald's eventual invasion, but the lord decided not to, and instead fled the country, so as to avoid the war, and the inevitable losses that would be associated with it. This, he later realized, was a big mistake, as it gave Digald the belief that they could win easily against any foe. Even if the country had fought and lost, the struggle would have made Digald think twice about starting a war. But instead, by fleeing, Digald gathered their forces and began their tyrannous reign. This lord is revealed to be none other than Ra Kan himself. Thus, he reasons, he no longer has any right to fight Digald.

They decide to leave abruptly, and tell the villagers to give Ron a message if here were to pass through after they leave. But Ruuji confronts Ra Kan once more, again pleading him to lead the anti-Digald movement. Galaga supports Ruuji, having been anti-Digald from the start, Kotona is indecisive, and decides just to stay with them until she can make up her mind. Seijuurou simply agrees to train Ruuji. Mii confesses that she always believed that Ra Kan would be the one to defeat Digald.

With this effectively unanimous decision, Ra Kan confirms that they aren't just choosing to fight Digald out of frustration from not finding a Generator mechanic, and challenges Ruuji to a duel. If Ruuji wins, Ra Kan will lead the resistance. If Ra Kan wins however, he will simply do as he pleases.

The battle begins, but Ruuji takes his hands off the console for a second, and Ra Kan is able to quickly seize victory. It is then that Ron shows up, apparently having forgotten the meeting point.

But having the freedom to do as he wishes proves to be unusual, as Ra Kan reveals his intention is to head to Mirodo Village.

The episode ends with Zairin fishing, but is disturbed by a brief flyby of a new Zoid, the Bio Ptera.

Retrieved from "https://zoids.fandom.com/wiki/Zoids:_Genesis_Episode_20?oldid=62495"
Community content is available under CC-BY-SA unless otherwise noted.