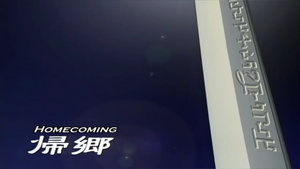 Homecoming an episode from the anime series Zoids: Genesis based on TOMY's Zoids model franchise.

Having lost a duel against Ra-Kan in the previous episode, Ruuji was forced to do as Ra-Kan instructed. To which he instructed Ruuji to return to his home town. Although he had won the duel, it seemed Ra-Kan was still going to take Ruuji's suggestion. However, he had made a promise with the villagers that he would look for a mechanic. As such, before anything else, he needed to ask them on their opinions. Ra-Kan and Ruuji decide to go with Kotona and use the Rainbow Jerk and fly there directly.

During the time Ra-Kan, Ruuji and Kotona were away, Seijuurou says the term "idiots" (baka in japanese) for the first time. A saying that would continue throughout the series. It is also learnt that Ron knows the term "Evolt", although he does not elaborate on this fact.

As they fly, the occupants of the Rainbow Jerk notice smoke rising from the city of Garagandan. Dozens and dozens of Bio Raptors were in the process of storming the city. Despite the city having defenses of its own, they were of little use. Rainbow Jerk began to withdraw, when the Bio Ptera encountered it. Since the Bio Ptera was faster than the Rainbow Jerk, they couldn't run, and thanks to its bio armour, they had few available weapons. Even so, by using the clouds as cover they manage to escape. Her Zoid had taken a few hits and the Metal Zi feathers were scorched, any lesser material would have broken. This was the first time any of the occupants had seen a flying Bio Zoid, including Ra-Kan.

In Digald, Zairin attempts to communicate with headquarters. Initially he was refused access, since he did not look like a Major (he was not in uniform). However once he gained access, he learned the equipment was broken anyway.

Mirodo villagers pull some fish from the sea, however they yield low numbers. This was due to the Generator not working. As Ra-Kan flies over, he points out the forests around the village were also beginning to die off. As they arrive, initially the villagers were happy, the believed Kotona was a mechanic (a logical assumption to make). Yet Ra-Kan needed to explain that was not the case. It was nightfall by the time they had explained all the details of what had happened. As they finished their explanation, the village chief (Ruuji's father) agreed to the idea, much to the surprise of the others. He understood that unless Digald were defeated, even if they found a mechanic, the village would not be at peace.

Ruuji took Kotona on a tour of the village, and he stopped by at his old friend Roreru's place. But the place was abandoned, his family, along with many others, had already left the village. While looking through the houses, Ruuji comes across his sibling Faaji. Faaji had been bullied for being Ruuji's sibling. Several of the villagers had thought Ruuji would come back with a generator mechanic, yet he had not done so. It was here that Ruuji decided to ask to say back another day, perhaps more. He wanted to apologize to everyone in the village personally. Thanks to his acts as he leaves, instead of hating him, the villagers cheer him.

Retrieved from "https://zoids.fandom.com/wiki/Zoids:_Genesis_Episode_21?oldid=62496"
Community content is available under CC-BY-SA unless otherwise noted.