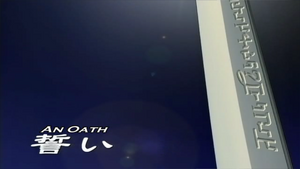 Vow an episode from the anime series Zoids: Genesis based on TOMY's Zoids model franchise.

The episode begins with Ra Kan and the others passing into a large city. They enter it from behind, passing through a waterfall and up through a mountain via the roots of a large Generator. This place is Zuuri city, the settlement Ra Kan used to rule over. They meet Da Jin, an official who worked under Ra Kan, and introduce themselves. He also reveals that Rei Mii is a princess.

As they walk through the streets, Ra Kan can't help but notice that the population has grown. Da Jin cites an influx of refugees fleeing Digald as the reason, much to Ra Kan's displeasure.

Da Jin sits them down for a meeting, and unfurls a "map of the world", much to everyone else's surprise. That is, everyone bar Ron, who notes that it is only a map of the one continent, but the remark goes unheard. The group is amazed by just how far it is they have travelled. But they are even more amazed by how much of it has been taken over by Digald's series of invasions.

After the meeting, Mii goes to visit her father, Rei In's, grave, as does Ra Kan and Da Jin. Here, it is revealed that Ra Kan is actually her uncle, being the older brother of her mother. Her mother died at an early age, and she and her father lived with Ra Kan for much of their lives. He piloted a Lanstag, protecting Ra Kan, but was killed by a Bio Raptor. It was some time after this that Ra Kan fled rather than resist the Digald attack. He had intended to go alone, leaving Da Jin in charge, both of the city and of looking after Rei Mii. He relinquished his power, and the ceremonial sword that signified his rule, but when asked to make a vow to one day return, he refused. Rei Mii followed him, taking her father's Lanstag, vowing to fulfil his role and fight by Ra Kan's side.

Ruuji goes and polishes Mii's Zoid, while Seijuurou gets some sticks, which he gives to Ruuji, before attacking him with his sheathed sword. Ruuji quickly realises his intent- to train him so that he can make full use of the Hayate Liger's two blades.

In the morning, a ceremony is held, and Ra Kan and Rei Mii talk to the citizens with a public address. Ra Kan tells them of everything he's seen, the horrible oppression caused by Digald, and reveals the purpose of his return, to turn the fortress of Zuuri into a base from which to rebel against Digald, and restore peace and freedom to the world.