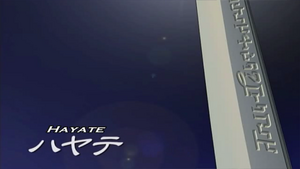 Hayate an episode from the anime series Zoids: Genesis based on TOMY's Zoids model franchise.

The episode beings in Zuuri city, with Ra Kan and the others inspect the large number of Lanstags, both from Ra Kan's old nation, and recently rediscovered ones excavated in Zuuri itself. But even with this contingent of large-scale Zoids, they know that Digald would not be defeated. Their army needed to be larger.

Thus, Ra Kan decides to send an appeal to every Digald resistance force that he had come across, from the Houmin tribe, and their black Sabre Tigers, Ringa, also armed with Sabre Tigers (red ones), and an Elephander division. The list also included Galaga's unit, but this was promptly crossed off the list, much to Galaga's displeasure.

Ra Kan invites Ruuji to write the appeals with him, knowing that he both can write, and is very influential, being the one who caused Ra Kan to return to his post and take up arms against Digald. Rei Mii, is not so accepting of Ruuji, and tells Da Jin of his so-called "unreliability". Da Jin simply tells her that this must be some kind of plan for the future, even light-heartedly suggesting that Ra Kan is planning to build him up as an heir, to one day marry Rei Mii- something which causes her to angrily end the conversation.

Elsewhere, Kotona finds Seijuurou nearly collapsing from a "cold", while Ron lets slip that the reason he's still with Galaga is because he's interested in Ruuji.

Ruuji works through the night to prepare the letters for Ra Kan, and in the morning, they are distributed to the various envoys, all dressed in white, who are sent off after a brief ceremony. Rei Mii and Kotona are sent out, with Galaga and Ron acting as their respective escorts, while Ruuji stays behind. He is told by Ra Kan, that rather than use the time to deliver messages, that he should train and focus on learning how to use the Hayate Liger.

A letter arrives from Harayaado, and Ra Kan gives it to Ruuji. It is from his family, who have been given refuge in that town by Lady Haara, and are therefore protected from the ills bestowed upon them by the failing generator. With his mind at ease, Ruuji sets about training with Seijuurou.

Ra Kan talks with Da Jin, and knowing that not all of the populace are from the old country of Kida, and that even among those who are, there are surely some who do not wish to partake in the upcoming battle. He sets about seeing to it that these people are given refuge away from the city, and are not involved in the conflict.

Ruuji continues to train, and although he is defeated by Seijuurou every time, he does show signs of improvement. But this downtime is interrupted by a message's arrival. It states that Tize, a former warrior in Ra Kan's forces, is still alive, and is opposing Digald in the Tooru mountains. These mountains, while not far from Zuuri, are across territory occupied by Digald, and thus, will not be easy to reach.

Of the pilots left, only Ra Kan Seijuurou and Ruuji are skilled enough to make the journey. Seijuurou silently gives his consent to let Ruuji go, and he, dressed in white, heads out as an envoy to relay the appeal.

He travels vast distances, but only short distance from his destination, he is spotted by the Bio Ptera. The pilot decides to see how skilled he is, and sends in a force of Bio Raptors. Ruuji is able to defeat a great number of them, but is still vastly overwhelmed.

Back at Zuuri, Seijuurou tells Ra Kan and Da Jin, that he would not have let Ruuji leave if he were unable to wield the Hayate Liger's power.

And indeed, in the battle, Ruuji is set aflame by the Bio Raptor forces, but his determinations takes hold and the Liger responds, the character that normally appears on his console flashes and changes, from Murasame to Hayate. With this, the Liger Evolts into the Hayate Liger, and with its blinding speed, he is able to break through the Bio Raptor forces, slaying a huge number of them before running to his destination. But even with this, he is still out numbered.

It is then that he hears an incoming transmission, telling him not to worry, as Tize, along with his Sabre Tiger division appear, their forces intimidating the Bio Raptors, and thus granting Ruuji reprieve from the attack.

He gives the appeal to Tize, who unconditionally accepts the invitation, and him, as well as all his forces, agree to immediately head for Zuuri.