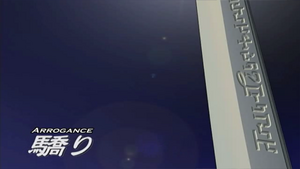 Arrogance an episode from the anime series Zoids: Genesis based on TOMY's Zoids model franchise.

This episode begins with Zairin, still on vacation, still trying to fix the broken communicator. He gets it working, although it remains out of focus, and he leaves to go back to fishing in an old lake he used to frequent as a child while the others make adjustments. He arrives at the lake only to find it smothered in pollution by a Digald factory.

In a flashback, it is revealed that he too was victim to a Digald attack, and like Kotona and Seijuurou were in Ze Ruft, he was made to place his hands on a stone that tested his aptitude. Simply by touching the stone, he was able to control the attached Bio Raptor. Taken into the Digald army and proved to be an incredible prodigy, even surpassing the son of Digald's king, and future leader of the Digald army, Jiin himself. Surprised, Jiin befriends Zairin. Zairin time and again proves to be an excellent soldier, and gives Jiin many victories. As such, he is given huge promotions, firstly so that he has seniority to all other troops bar Jiin himself, and second, he is assigned the Bio Megaraptor.

As the flashback ends, Zairin finds a familiar face, Whips, an old friend of his. He is frail and sickly, even though he is only as old as Zairin is. It was a result of living in the now polluted village. There were few who had stayed, many were recruited and never heard from again, all of this does not sit well with Zairin. Nonetheless, the communicator is quickly brought back online, and Zairin is ordered to return to headquarters.

At Zuuri, the forces begin to arrive. Hou, and his Sabre Tiger division are welcomed by Ruuji. He promptly boasts to Ra Kan of his troupe's great power. Next to arrive is a squad of Command Wolves, followed by more Sabre Tigers and an Elephander division. They meet in a "break hall" and the forces converse. All is not well however, and a fight breaks out between the leader of the Elephander and Command Wolf forces, after the latter mocks the former for being defeated by only a single Zoid. The fight quickly escalates to an all-in brawl. Seijuurou puts an end to the battle by cutting out the lights and threatening to kill anyone who continued to fight.

At Digald headquarters, Zairin is informed of the defeat of Georg, and the survival of Ra Kan. He is then given the task of defeating the Murasame Liger, something he is quite thankful for, fearing that either Felme or Souta would get the task instead. He is informed that both of their Zoids, the Bio Ptera and Bio Kentro, still require testing, which surprises Zairin, who knew of the Ptera's completion, but was unaware of the deployment of the Kentro.

And indeed, it was deployed, and is attacked by three Shadow Foxes, who were headed for Zuuri, but these are swiftly defeated, and left behind for Digald's Bio Raptor forces.

At Zuuri, Kotona heads out to do some scouting, and finds a surviving Shadow Fox. He raises the alarm, warning her of an incredibly powerful Bio Zoid. Quickly, the combined forces deploy, without any orders to do so, simply eager to prove their worth to Ra Kan, but their forces are, despite their great numbers, completely overwhelmed. They simply have no idea how to fight.

Kotona drops the Murasame Liger into the confusion, and to make himself stand out, he Evolts into the Hayate Liger and quickly annihilates multiple Bio Zoids. He points out that the Bio Raptor's weak points are the unarmored inside of their mouths, and with this, the forces are quickly able to secure victory.

The forces, however, simply think they won through their natural abilities, and their egos are highly inflated. Thus, even though they had won, Ra Kan remains greatly concerned for the future.