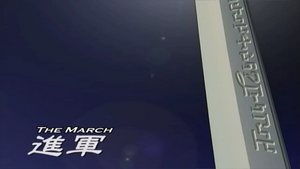 Advance an episode from the anime series Zoids: Genesis based on TOMY's Zoids model franchise.

The episode begins with Seijuurou once again training Ruuji, with Ruuji getting better and better, while the new forces simply gloat over the size of their victory in the last battle, despite it being won only by Ruuji's intervention.

The training is halted as a meeting begins. The leaders of forces are gathered together, but only two per group, aside from the seven (plus Da jin and Tize) in Ra Kan's group. This quickly sparks tension, as it implies that he sees himself as superior to them, rather than as equals, and even though they are unique, thanks to their possession of Metal Zi weapons. Seijuurou is the first to act, and silently leaves, as Ron, who drags along Galaga. Kotona leaves, and as she does, she mocks the men (being the only woman in the room other than Mii). With this, Ruuji moves to leave, but is told to stay by Ra Kan. Da Jin then takes Rei Mii into his group, and the dispute is settled, though neither Rei Mii nor Ruuji know why Ra Kan insisted Ruuji stay.

The groups plead with Ra Kan to march on Digald right away, who retorts with the fact that though victorious, they had many casualties. Eventually, it is decided that they will march on Digald at first light. Even Ruuji knows it is far too early for them to march, but hadn't spoken up at the meeting. Ra Kan explains that to stop their attack with words would leave the group fractured and therefore fatally wounded. Even if the result is certain defeat, they must press onward.

The next day, they set out, and are watched by Bio Raptors. Zairin arrives in Torafu, and greets his old mentor, Boraa, leader of Torafu's forces. Here, they explain the situation, the fact that Ra Kan has amassed an army and split up, before finishing off the Digald scouts. Zairing quickly puts two and two together, knowing Ra Kan has a flight-capable Zoid, he knows Ra Kan is aware of the Digald scouts. Thus, he believes the initial separation of his forces was a diversion and ignores it when devising his battle plan. He then guesses as to their location, a place not occupied by Digald. With this, he deduces their target: the gate of Attaka, which is indeed the location Ra Kan had decided to attack. It is a vital transport hub, and without it, supply lines would be greatly disrupted, and is a target that would impress his officers, thus gathering the required support for his deployment...

...However, Ra Kan reveals that this, despite what was agreed upon in the meeting prior, shall not be attack. He knows the Digald have ceased to scout his army's movements, and thus concludes his plans have been discovered. For this reason, he changes the target to Torafu...

...But this is also read by Zairin, who notes that an attack on the Gate of Attaka will leave Torafu weakened, allowing them to first take it, and then the gate. But getting to the fort would surely cause them to be spotted by Digald if they were to travel by normal means. Instead, Ra Kan proposes to travel via the "River of Fog", a large canyon with a dam at one end that causes a perpetual fog. This fog is then blown down the gorge, forming a perpetual "river", though it has no running water, providing them an ideal cover.

Ra Kan, to make his attack seem legitimate, sends one member of his group to the Gate. That night, the forces move out, though Ruuji thinks that by using the River of Fog they will be able to make a swift return to Zuuri if the plan fails. Ra Kan simply replies by telling Ruuji to note what is upstream of the river.

Elsewhere, Felme approaches Zairin, who initially declines her offer for help, but quickly changes his mind, and decides that she will in fact be useful, but says no more. In the break before the battle, a soldier who overheard part of Ruuji and Ra Kan's conversation, informs the leader of the Elephander division, while Seijuurou begins the diversion attack on the Gate. But this has all been read by Zairin, and a massive army of Bio Raptors head down the river toward Ra Kan's troops.