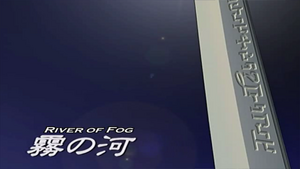 River of Fog an episode from the anime series Zoids: Genesis based on TOMY's Zoids model franchise.

This episode beings where the last left off, with the Digald and Zuuri forces moving for an all-out battle. Kotona spots the Digald troops and quickly informs Ra Kan that they are headed for the Gate of Atteka, using the River of Fog for cover, thus leaving Torafu empty. Ra Kan is nervous, the plan working too well, and he is accused of being a coward, afraid of conflict. He simply passes it off as wishing to avoid unnecessary loss.

But the Elephander team doesn't buy this, and decides to head off on their own, thinking an easy victory was at hand. They claim Elephanders are slow, and need a head start if they are to keep up with the rest of the army. This is seen through by some of the other commanders, and the leader of a Sabre Tiger division heads out as well. This triggers a mass outflow of the over-zealous troops. But Ra Kan refuses to deploy, knowing that moving too early will result in Digald's forces not being split up enough, and therefore will up them at a disadvantage. But when Ron delivers the news of the Elephander's early departure, he is forced to act, and sends Tize out to stop them from being seen too quickly.

Meanwhile, Kotona recovers Seijuurou, as the battle begins. Singled out against a massive Digald army, the Elephander battalion is quickly annihilated. Reinforcements are not far behind, but are confused by the sudden influx of Digald troops, and unable to discern friend from foe in the fog, and lead into a massacre. Kotona is attacked from above by the Bio Ptera, and, being weighed down by the Soul Tiger, is rapidly overwhelmed. She is shot down and crash lands, while the rest of Ra Kan's force arrives, this time in formation. The only group to retreat without massive casualties is Tize's team, and the Elephander team is left with naught but one Zoid.

Desparate, Ruuji remembers the dam upstream and heads off on his own to try and achieve victory. He warns his troops to head to high ground, but when he arrives, he is attacked by the Bio Megaraptor. Zairin, having read Ruuji's plan, refuses to let him break the dam, and he uses the fog to his advantage, confusing Ruuji. Ruuji realises that the reason he cannot find Zairin is because of an echo that disguises his Zoid's movements, as well as the fog that blocks out visibility. With this, he changes strategies, and blasts the fog with his Zoid's shock cannons. He fires at the dam, and hits Zairin, who had been standing in front of it. This momentarily parts the fog as he Evolts into the Hayate Liger, which catches Zairin by surprise, having never seen it before. This gives him the speed to overwhelm Zairin, and he knocks Zairin down, before returning to the Murasame form and skewering the Megaraptor against the dam, shattering it in the process. the Bio Zoids and Zairin are washed away, and the battle is concluded. Fortunately, Ruuji, and most of their forces are able to get out of the way of the incoming flood.

After the battle, the injured Kotona reawakens, and, with this the small fraction of their surviving forces once again regroup.