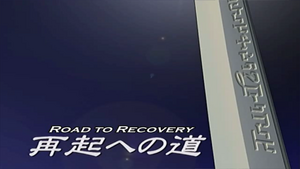 Road to Recovery an episode from the anime series Zoids: Genesis based on TOMY's Zoids model franchise.

The episode begins with Ruuji and Galaga scouting for survivors, but only manage to find the leftover scraps from annihilated Zoids. In Zuuri, Kotona's Rainbow Jerk is repaired, but Seijuurou falls ill, and is taken to the infirmary, where a huge number of the wounded are already gathered. Rei Mii meets with the leader of the Elephander division, who is absolutely devastated by the loss of every single one of his subordinates in the last episode, and she goes with him to place flowers at their graves. Ra Kan talks with Da Jin in the meantime, noting that only about half of their forces have survived (although more may still be outside of Zuuri), but is nonetheless glad to even have half of his troops still with him.

Digald also searches for survivors, and find the Bio Megaraptor. Zairin had already been recovered by his mentor, Boraa, and was being treated by Jiin back in Digu, Digald's capital. His possessions are salvaged from his Zoid and returned to him upon his recovery. Here, he also learns that the Bio Megaraptor has entered mass production, and can now be piloted by anyone, not just Zairin. This is all thanks to data gathered from Zairin's many battles.

Back at Zuuri, Ron secretly arranges for a meeting with Ra Kan, discussing Ruuji in secret. Here, he asks Ra Kan to ensure Ruuji doesn't develop further as a pilot. Ra Kan, who has suspicions about the enigmatic Ron, doesn't agree right away, and instead begins to bargain with him. Ruuji returns to learn that Seijuurou is hospitalized, but is told not to worry, and instead head to Ra Kan for an immediate meeting and strategy planning session.

Ra Kan advises that not only do they not know enough about Digald, but they do not know enough about their own, newly assembled forces. Despite that they are urged to continue their fight, as Digald still poses a great threat to the world. But Ra Kan instead disbands the resistance, giving them a fifty day opportunity to rethink their involvement in the cause, after that time, a counter-attack will be mounted against Digald. After this, Ra Kan returns to the old group and asks them to gather more comrades, both those who declined the first time, and those who are as of yet unknown to his forces.

Ruuji is assigned to Ron, along with Mii, as they are the youngest, and thus the most suited to capitalize on Ron's extensive knowledge. This puts Galaga with the newly-recovered Seijuurou, and Kotona with Ra Kan (much to Galaga's displeasure).

but just as they decide to set out, they are informed of a Digald attack, and race off to help the victim. There is an added sense of urgency, as Ron tells them that it may be an acquaintance of his, and thus, may be carrying some very important gear.

Ruuji is grabbed by Kotona and lifted to aid the convoy, as Zuuri's Sabre Fang forces arrive and set to work fighting the Bio Raptors. While somewhat successful, they are surrounded and only the arrival of the Murasame Liger (and subsequent change into Hayate Liger), are the Bio Raptors stalled long enough for the rest of the forces to arrive. But as they fight, a new force arrives, Hou's surviving contingent of Black Sabre Tigers.

The transport is saved, and Ron reveals the contents, a series of upgrade weapons to be installed on their force's main Zoids. These include a new set of antlers for the Lanstag, a new sword for the Sword Wolf, boosters for the Rainbow Jerk, spears for the Bamburian and boosters for the Soul Tiger. After these are revealed, Hou returns and confronts Ruuji, he grabs him and thanks him for flooding the gorge in the previous episode, as it saved him and his battalion's lives.

But in Digald, a new Zoid is revealed, the Bio Volcano. Zairin gets in to pilot it, and is electrocuted by feedback from the Zoid's systems. Zairin mistakes this for the wounds he sustained in battle, not knowing the true cause, but doesn't care either way, as he feels the Bio Volcano's extreme power, and, confident of never loosing again, laughs as the episode ends.