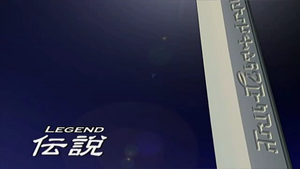 Legend an episode from the anime series Zoids: Genesis based on TOMY's Zoids model franchise.

The episode begins in Digald's capital, with Jiin giving Souta and Felme a new task: to hunt down Ra Kan. Despite this being promised to Zairin, it is given to them, as Zairin needs time to grow accustomed to the newly-developed Bio Volcano. The announcement shocks the two of them, and they are brought to see the Volcano in action. Souta comments at its strength, but Felme simply calls it dangerous. Inside, Zairin struggles to maintain consciousness, as piloting the Zoid is shown to be very, very taxing on the otherwise stand-out pilot. He sees Jiin and dismounts, agreeing that Ra Kan must be defeated (personally acknowledging only Ruuji as his adversary), and is thus unopposed to the mission being taken away from him. Instead, he decides to take the Volcano out for an actual battle, so as to test it out under real conditions.

Elsewhere, Ron, Rei Mii and Ruuji head for Youko, a mountainous region, where there are probably no anti-Digald forces, but there will be a chance for them to sneak into Digald territory, thus giving them access to people and places the last appeal could not reach. They travel with the transporter Yakku, and decide to join in on the town's festival while they're in time. Indeed, Ron actually wanted the two of them to be there for the festival, although Mii is not so impressed, as she is dressed up in some rather skimpy clothes in order to help with Yakku's sales.

They see several giant floats, and Ruuji and Mii are put to work in the store selling some miniature Zoid carvings, but Ron arrives and takes Ruuji away (though Mii follows as well). His friend Jio takes them to a large underground passage, which normally no-one is allowed to enter, but with Ron with them, they are let it. Inside, Ron talks to Ruuji about the "god's wrath", the apocalyptic even that shook Zi thousands of years ago. Ruuji recites what he knows of the event, that people took to the skies long ago, "causing the gods to become angry", which led to the apocalypse that ruined their civilizations.

Mii has heard the story too, but disbelieves it, not being able to comprehend a civilization more advanced than the current one ever existing. Ron points out that Zoids exist, but Mii dismisses it, saying you find water, Reggel, and Zoids underground, implying they are just all naturally occurring phenomena. But then Ron talks about the Generators, that those too were left behind by the old civilisation, but again, she simply dismisses it, thinking those too are just natural parts of the scenery, like trees or oceans. Ron agrees with her, noting how easy it is to simply accept these things as natural, considering how long they've existed for, and thus conclude that the ancient civilisation never existed. But it is then that they arrive at their destination.

Here, Jio says a password and places his hand on a panel, kept behind a locked door. Doing this opens a secret passageway, as the screen pans away. Inside, they see a magnificent room, filled with artwork and sculptures, protected behind a "barrier", an invisible force field that protects the valuable objects. But Ruuji is amazed by something more mundane, the ceiling lights and polished floor. Attacking the barriers, Mii trips and accidentally hits a button that triggers a hologram to appear, taking the shape of a dancing woman, which petrifies Ruuji and Mii. Ron explains that all this was the work of the ancestors. Jio also explains that the festival they are witnessing is to celebrate the legend that one day an arc will appear and take them into the sky to live with the ancestors.

Nearby, Zairin deploys the Bio Volcano against some Baratz, as part of his initial training regime, and a single shot from his flamethrower makes an explosion large enough to be seen from within the town. Even Zairin in amazed by its power. Ruuji quickly sorties to investigate, and much to his surprise comes face to face with Zairin's new Zoid. He is quickly overpowered, and is forced to use the Hayate to match Zairin's speed. With it, he literally runs circles around the Volcano, but is unable to so much as scratch it. Even Mii's Zoid's Lace bounces off the Volcano's armour. Ron distracts it momentarily, and they escape.

Back in the city, they find Mii's cockpit badly damaged, her life only saved by the new pair of horns equipped in the last episode. Though temporarily incapacitated, she is in good spirits, and dumps her cooking duty onto Ruuji's shoulders.

Retrieved from "https://zoids.fandom.com/wiki/Zoids:_Genesis_Episode_28?oldid=62516"
Community content is available under CC-BY-SA unless otherwise noted.