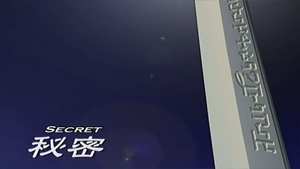 Secret an episode from the anime series Zoids: Genesis based on TOMY's Zoids model franchise.

This episode begins in flashback, with Kotona as a child, being attacked and thrown into a large pool of water, where she fell into her Zoid, the Rainbow Jerk. It is revealed that the place she was fleeing was Iron Rock, her home.

Back with Ruuji, Ron, Mii and Yakku, Mii sleeps to heal from her injuries sustained in the previous episode, while Ron explains that Digald probably has a Zoid factory, due to their constant deployment of new units like the Volcano. This surprises Ruuji, who, like Rei Mii, thought they were simply dug up.

Farther away, Ra Kan is acting on this suspicion, and, with Kotona, approaches Iron Rock, a cursed town, where all who enter are said to die.

He inspects it from a distance, and finds it crawling with Bio Raptors, but Kotona dismisses the curse as nonsense, and shows Ra Kan a secret underwater passage into the city. Underwater, they enter the "forbidden valley", a valley littered with the ruins of a city (although Ra Kan can only speculate about this, having never seen any buildings like these before). They are quickly attacked by a masked assassin, but as Ra Kan shouts out her name, the assassin stops. He takes off his mask and greets Kotona, when suddenly many more masked people show up as well, one of them is revealed to be none other than Kotona's sister, much to Ra Kan's surprise. Quickly Kotona and Ra Kan surrender, and are taken prisoner.

Kotona explains that she is part of a clan of people who guard Iron Rock, assassins who kill anyone who discover its secrets. This was true in the past as well, as a wandering performer who once entered the city, and had entered the forbidden valley searching for Zoids, dived into the lake there, and found the Rainbow Jerk. For finding out about this secret, he was quickly killed by their family of assassins, under the guise of the so-called curse.

But the flashback is interrupted by the entrance of Digald soldiers. Felme, pilot of the Bio Ptera, confronts Ra Kan and interrogates them to find out the locations of their comrades. Kotona's sister, Rinna desperately wants to kill Kotona, for having broken their village's laws and deserted them, but is held to ransom by Felme, who mentions the "dragon of destruction", thus keeping her in at bay.

Kotona and Ra Kan escape with the help of Kotona's bird, who she had trained to retrieve lockpicks. They escape Digald using an elevator (something Ra Kan has never seen before), but stumble into a Bio Zoid factory, this, Kotona explains, is the secret of Iron Rock, an ancient facility now in the hands of Digald's troops.

Rinna apprehends them, blaming Kotona for betraying their village and running, moves to kill Kotona, but Nouga stops her, revealing that she had in fact fled to stop Rinna from being killed, as the weaker of the two siblings. But the reunion is short-lived, as Felme intervenes. Kotona quickly grabs a console, and triggers a process that starts destroying the facility. Felme shoots her, but Rinna takes the bullet instead. Ra Kan and Kotona escape to their Zoids. Using the upgraded sword, Ra Kan is able to slice a Bio Raptor in two from a range, while Kotona, even after carrying the Sword Wolf, is able to escape the Bio Ptera using her new-mounted boosters.