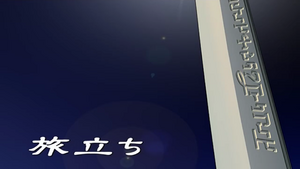 Setting Off an episode from the anime series Zoids: Genesis based on TOMY's Zoids model franchise.

Picking up where the last left off, Ruuji, Ra Kan and Rei Mii fight Zairin's Bio Raptor forces. The latter two, outnumbered, are pinned and set aflame, while Ruuji is attacked by Zairin's Bio Megaraptor. He is able to block thanks to his "Metal Zi" sword. Zairin puts two and two together and figures out that this is why his forces were defeated. Ruuji thinks that using this he can attack Zairin, but he proves to be a superior pilot, and Ruuji is unable to land a hit.

The Bio Raptor holding Ra Kan overheats and explodes, freeing his Sword Wolf, which jumps into the ocean to save itself, before quickly freeing Rei Mii. The duel between Ruuji and Zairin shifts, and Ruuji is placed in front of the village's Generator. Zairing, knowing that Ruuji's sword is dangerous, attacks from a range with his flame thrower, but Ruuji dodges and the Generator is hit and destroyed instead. Even Zairin laments at the loss and thanks to that distraction Ruuji is able to slice off the Megaraptor's arm. With this damage, Zairin quickly retreats, though the everyone is saddened by the Generator's destruction.

Ra Kan and the village elders head into the Generator, but are only able to confirm that it truly has ceased functioning.

Ruuji's father makes an announcement to the villagers, telling them that without the Generator, the village is doomed. Without its operation, the Village's Reggel supply will cease, the crops will fail and the fish supply will run out. The village will eventually succumb to pestilence and famine and will be ruined.

Ra Kan has a brief flashback and notes that leaving home is truly painful, and announces that he will try to search for an engineer who can fix the generator. Ruuji's father gives them the left over Reggel and places the village's trust in Ra Kan, even though he knows that the odds of them actually succeeding in repairing the Generator make it far from a reliable plan. He also asks Ra Kan to let Ruuji travel with them. Ruuji's family gives Ruuji all their money (as they don't use it within the Village), along with the clothes he needs for his journey. His father gives him a family heirloom, a telescope, while Faaji gives him a good luck charm. Ruuji sets out with Ra Kan and Rei Mii the next day.