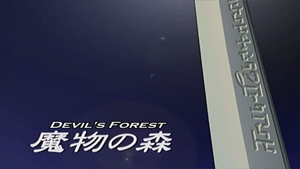 The Devil's Forest an episode from the anime series Zoids: Genesis based on TOMY's Zoids model franchise.

The episode begins with Ron, Ruuji and Mii, with Ruuji trying to lower Mii's temperature, being misunderstood by Mii, and thrown across the room.

It quickly cuts to Galaga and Seijuurou, searching for the Zoid pilot Danbul, and Danbul Zoid the Konig Wolf, in an area of "haunted" forest. This pilot has a legendary reputation, but is unknown to even Seijuurou, as the story is a very old one. Galaga guesses at their appearance, expecting a man of great stature, but Sejiuurou doesn't join in on the speculation. They head into the "Devil's forest", and although Seijuurou stops, Galaga enters, and his Zoid breaks out spontaneous dance. Seijuurou moves to help him, but is likewise, forced to break into dance.

Both Zoids shut down after a while, and Seijuurou and Galaga get out. Galaga thinks Seijuurou blames him for entering the forest, so he starts throwing rocks at him. These are deflected by Seijuurou's swordplay, so he gets into his Zoid instead... Only for it to just start dancing again.

Seijuurou calms him down with food, and begins to ask Galaga about Ruuji, but they are interrupted by an old woman who walks into their camp. She explains that she used to be partners with Danbul, but goes to sleep, wanting to talk in the morning, knowing that their Zoids won't work at night, due the strange influence of the moon.

They explain their proposition to the old woman, who says that Danbul will show up when needed, and invites Galaga and Seijuurou to stay with her. As Galaga talks about his anger toward Digald, the old woman confronts him, telling him not to let his anger cloud his judgement, before heading off with Seijuurou to a lone grave nearby.

Later, Galaga once again talks to Seijuurou, this time saying that he wants Galaga to look after Ruuji in his place, Galaga realizing that what he's asking of him is some kind of will. But at that moment, the old woman reveals herself, having listened in on the conversation, and tells Seijuurou not to give in to despair. At least, she says, he will live longer than she will, and that alone should be enough to give him hope.

They spend three days with the old lady, but with no sign of Danbul, they decide to leave the next day. The old lady explains that Danbul had quit piloting Zoids, in much the same manner Seijuurou had, after causing an accident in a tournament where one of their loved ones was killed. Thus, Danbul gave into despair. But Galaga dismisses it as nothing like Ruuji, Ruuji having never given up hope, no matter how desperate the situation was. Unknowingly, Galaga lectures the old lady, who later goes out to the grave once more and talks to "Danbul", musing that the idea of creating a world where everyone can smile really would be a good thing, if they were serious about it.

But that night, Bio Zoids enter the forest and surround the house, knowing that the Soul Tiger and Deadly Kong will be useless within the forest, which has no effect on their Zoids. Forced to fight only in a small clearing, they are picked at by the Bio Raptors. Seijuurou uses the upgraded parts he got from Ron to send bullets through the forest at curved angels, driving out the Bio Zoids, allowing Galaga to finish them off. But more keep coming.

This time, two Bio Megaraptors. These Zoids set fire to the old lady's house, and Seijuurou pins one Megaraptor before getting out of his Zoid to help her. She muses that they really are serious about defeating Digald, but both her and Seijuurou are engulfed in flames as the other Megaraptor shoots the house again. Galaga becomes enraged, and the Megaraptor flees into the forest. He follows, as Seijuurou emerges from the house's rubble to warn him of the trap he's walking into.

The Deadly Kong starts to dance once more, and Seijuurou begins to call Galaga a fool, but catches the words in his mouth and smiles instead. The Megaraptor moves to attack the defenseless Deadly Kong, only to realise that the moon had already set, and that the Deadly Kong was indeed operational, so it was quickly able to defeat the unprepared Bio Zoid.

But the other one was able to free itself and moved to attack the Zoidless Seijuurou, when the grave the old lady was talking to explodes, revealing a Konig Wolf. It is unable to harm the Bio Zoids, but is able to blast open a pit that it falls into, allowing Galaga to finish it off.

The old lady reveals herself as Danbul (much to the surprise of Galaga, but not Seijuurou), and agrees to help in their fight. As she leaves for Zuuri, she wonders what Ruuji's like, and starts to think he's some kind of blonde-haired hunk (much the same way Galaga's imagination got away from him mere moments ago).

The episode ends with Ruuji being accused by Mii of peeping at her, and promptly being beaten up with a fish.