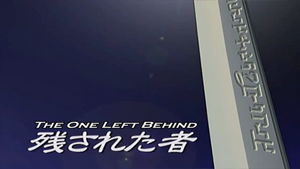 The One Left Behind[]

The One Left Behind an episode from the anime series Zoids: Genesis based on TOMY's Zoids model franchise.

The episode beings with Ruuji's transport continuing it's journey. Yakku notes that she thinks someone's watching them, while in the trailers, Mii manages to make a full recovery. They enter the next town, only to find it deserted, along with a Digald billboard with wanted posters all over it. As they leave, the person tailing them destroys the billboard out of rage.

The next time they set up shop, a customer buys several things before asking Ruuji to bring the items back to her home, as she claims to have forgotten her wallet. He agrees, and is led down a series of alleyways, before the person attacks him.

The woman introduces herself as Gaball, partner of the now-deceased Dinga, who had joined Ra Kan's forces but perished in the ill-fated mission in the River of Fog. She blames Ruuji for his death, thinking Ruuji was a traitor, who abandoned his comrades in the middle of battle, thus leading to Dinga's death. She attacks Ruuji with a pair of yo-yos, and refuses to listen to Ruuji's replies.

Ruuji is able to make a run for it, but as he runs through the town's streets, Gaball is not only able to keep pace with, but yells out his name, quickly attracting the attention of nearby citizens. Ruuji is eventually cornered, but Rei Mii is able to surprise her and knock her out. Meanwhile, the citizens, alerted to Ruuji's presence, quickly inform Digald of his whereabouts.

Gaball regains consciousness, where she explains that she had been checking each and every Gustav for the rumored blue Liger, and its pilot. She reveals that she was left behind when the others went to join Ra Kan because her Brastle Tiger was in need of repair, and was given the yo-yos by Dinga to cheer her up. The survivors told her of Dinga's death, but she only gathered the actual events of the battle from second-hand sources, and had therefore thought that Ruuji was so desperate to get the glory of defeating Digald, that he had caused his comrades to be slaughtered.

Ron returns her yo-yos, and, seeing that she refuses to listen to anything they have to say, gives her a chance to settle things with a duel, Ruuji's Liger vs her Tiger. But as the fight commences, Digald draws near. They interrupt the fight, and Ruuji uses himself as bait to let everyone else escape. Gaball takes him away from the battle, but accidentally leads him into a trap, where steam geysers and steep cliffs prevent Ruuji from fighting effectively. He shields Gaball with his own Liger, before Ron shows up and distracts the Digald forces. Ruuji urges Gaball not to give up, before changing into the Hayate Liger and using it to get her damaged Zoid out of the valley. Once out, Ruuji is quickly able to defeat the Megaraptor.

They repair her damaged Zoid, and she swears revenge for Dinga, but not against Ruuji, rather, against Digald, having realized during the battle the Ruuji was not the selfish pilot the stories had portrayed him as.