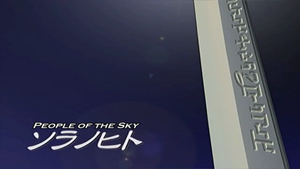 People of the Sky []

People of the Sky an episode from the anime series Zoids: Genesis based on TOMY's Zoids model franchise.

The episode begins with Zairin, still testing the Bio Volcano, where he is informed of Ruuji's last known movements. He moves to inform Jiin, but is reminded that an imperial meeting is underway in the capital.

At the meeting, Jiin talks with his father, who takes him, along with two other officials, to the topmost point of Digu's tower. Here, they are met by three people, who, in exchange for Reggel, give them schematics for a new wireless communication device, before vanishing in a flash of light. On the way back down, they mention who it was they were dealing with, the Sky People.

Elsewhere, Ruuji, Ron and Mii arrive at the ocean city of Katou. They let Yakku's convoy into the heavily fortified city, which, Ron tells Mii and Ruuji, has withstood enemy sieges for over a century. Here, they repair the Lanstag at a large Zoid repair station, as well as give Mii a checkup at the local hospital. While here, the city's mayor introduces himself to Ron. He repeats the legend heard previously in the festival of heaven, the one about the ancestors arriving and taking the people to the sky, but with a small change. There was actually an arc that did transport people, over and over again, until it ran out of power and sank into the ocean. The group, seeking evidence of the myth, is taken by Ron to the ocean. Underwater, Ron uses a (modern) torch to find a submerged cave, and the three swim into it. In this underground cave, they find the tail of a colossal Zoid, though they cannot get inside it, as it is almost completely buried by rock.

They return to the mayor and repeat the legend one more time, that the Gil Dragon was born from hope, and exists to save people by ferrying them to the sky. But the mayor has his own views on the story. Ron explains that there may even be more than one Gil Dragon. Later that night, Ron awakens Ruuji and brings him to a secluded room, where a small contingent of people meet him. After approving of him personally, they agree to help him out however they can, and however he wishes, but they make clear that they are not working for the army, rather, for Ruuji personally.

Elsewhere, Zairin gets a lead on their location, and even without any backup, heads out to face Ruuji, even though he feels significant duress while piloting the Volcano (still attributing it to injuries sustained in the River of Fog).

As Ruuji's group leaves Katou, the mayor gives him a map, one much more accurate than the one Ra Kan possesses. With this, the three of them head off in high spirits. With the townsfolk giving their word that they'll support Ruuji, Ron is so relieved, he even jests about being able to die happy, a premature comment as the Bio Volcano quickly attacks them.

Ron blasts it with his Zoid's missiles, but they deal it no damage. Ruuji quickly Evolts into the Hayate Liger, but is overpowered, and is unable to maneuver effectively in the rough terrain. Out of desperation, Ron attacks the Volcano with all his remaining weapons, though he knows that isn't enough to destroy it. Instead, he simply pins it with his Zoid and triggers its self-destruct sequence. Ruuji and Mii escape as Ron says his goodbyes, and the Bamburian explodes.

But Ron reveals himself to not be dead at all, having jumped onto the Liger's shoulder before blowing his Zoid up.