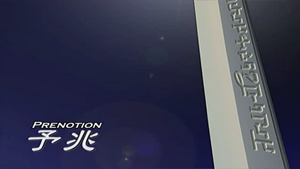 Omen an episode from the anime series Zoids: Genesis based on TOMY's Zoids model franchise.

The episode begins with Rei Mii, Ruuji and Ron camping out after escaping from Zairin in the previous episode. Ruuji blames himself for the loss of Ron's Zoid, but Ron is actually quite upbeat about it, and apart from noting that the loss of the Zoid is a sad one, is not depressed at all. Even though Mii agrees with him and tries to get Ruuji to cheer up, even she thinks it suspicious that Ron is so normal, given the losses he had just incurred. Ron quickly changes the subject and decides to visit Tekitou, the city where Ra Kan and Kotona should be in, an idea which Mii likes.

Meanwhile, Ra Kan and Kotona are meeting with another group of Digald resistance forces, these ones armed with Molgas. They decline the offer initially, but not absolutely, simply asking for more time to make up their minds. The leader of this group explains to Ra Kan that he does not believe that he has what it takes to win, nor does he have a catalyst with which to bind, and instill confidence in, the troops. This was the same for multiple other such bands, who all wish to fight Digald, but fear the consequences of joining the already-defeated Ra Kan. With time coming close to the fifty-day limit, Ra Kan and Kotona decide to head to Tekitou to refuel before heading back to Zuuri.

But before entering Tekitou, they notice the Bio Kentro and Bio Ptera, as well as some Bio Raptors already in the town. Kotona decides to enter the town on her own and try to get the Reggel they need. Souta decides to walk through the city as well, sick of waiting for Ra Kan to show up. He walks in on a man praising the Murasame Liger, and hurling insults at Digald, and orders his troops to execute him for his insolence. Kotona intervenes and saves the man, but is promptly attacked by Digald's forces, including the Bio Kentro. She manages to escape into the forest, where Ra Kan is able to cover her escape, but as he moves to fight the Kentro, he is caught off-guard by its weapons, and even though Kotona picks him up, its missile-like projectiles are able to home in on her, and results in Ra Kan being thrown into a valley filled with the ruins of the ancient civilization.

He powers down his Zoid to conserve Reggel, while Souta persues him. He is able to hide, while Ruuji meets with Kotona. At dawn, Souta finally finds Ra Kan, and is able to badly damage the Sword Wolf, but Ruuji is dropped off by Kotona before he can strike the final blow. Souta calls off his Bio Raptor forces and decides to duel Ruuji personally. The Murasame Liger is able to evade the Kentro's charges, so instead it fires its missiles at him. Ruuji quickly changes to the Hayate Liger, and its speed lets him evade once more. However, the Hayate's blades are much shorter than the Kentro's Beast Slayers, and cannot overpower the Zoid. It keeps firing at him, but he keeps evading, using Souta's attacks to destroy the standing-by Bio Raptor forces. Once again he attacks, and once again, he is unable to effectively attack the Kentro. But at this moment the Bamburian arrives. It and the Lanstag attack it from both sides, and pin it down momentarily. Ruuji realizes that he still has the Murasame Liger's blade, and uses the Hayate to charge the Kentro, jumping over it's blades, before quickly Evolting back to Murasame, where he uses it's large blade to increase his reach, allowing him to slice into the Kentro's shoulder, crippling it.

Felme arrives and retrieves him, and the conflict is resolved.

Ron reveals that he had a second Bamburian, and Yakku reveals that the Volcano was not in the crater left by his last Zoid's explosion.