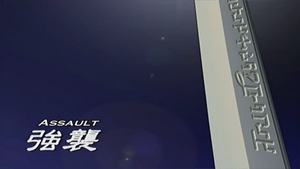 Assault an episode from the anime series Zoids: Genesis based on TOMY's Zoids model franchise.

The episode begins with Digald attacking Zuuri city. They are met with fierce resistance, and are unable to penetrate the fort. Elsewhere, Felme, Souta and Zairin lie in wait for their rematches with Ruuji. Eventually, Ra Kan and the others return, but unbeknownst to them, they are watched by Digald sentries, who use their return to discover Zuuri's hidden entrance.

Da Jin welcomes Ra Kan back, and the quickly holds a meeting of the joint forces. Ruuji is surprised to find Gabbal in the meeting room, and is also introduced to Danbul, before the conference commences. Outside, the Digald plans to invade Zuuri, with a three-pronged attack, one frontal, one from the newly-discovered entrance, and one with Felme's Bio Ptera. In the meeting, Ra Kan tells them that Digald is producing Bio Zoids, which, coupled with the news of Digald's ever-increasing expansion, and the fact that their loss at the River of Fog has stopped several groups from joining up with them, put Ra Kan's army in a difficult position.

They note Ruuji's ever-increasing fame, and they use this to bolster their troop's confidence. Afterwards, Ron and Mii talk to Ruuji, Mii inviting him to the kitchen, while Seijuurou talks with Kotona, this time openly optimistic about the length of his life, after having his opinions changed by his interactions with Danbul. Much to his surprise, Mii give Ruuji a soup, rather than her usual barbecue, and he remarks that it actually tastes good.

Digald prepares their invasion throughout the night, with the Bio Zoids previously assumed defeated suddenly reactivating and launching a surprise attack on Zuuri at point-blank, but this time breaching the waterfall area, quickly making the battle much more serious than before. The battle is fierce, and quickly, Ra Kan's forces sortie. Ruuji is one of the last to sortie, and is told to head up, and inside rather than out the back, by Ron, to stop the Bio Kentro, which had been dropped in from above by Felme.

Ruuji quickly Evolts into the Hayate Liger and charges the Bio Kentro. The two duel, but once again Hayate's range disadvantage proves to be its downfall. Even the Murasame would be of no use, as the Kentro has two blades, whereas the Murasame has only one. Ruuji is blasted by the Kentro, but remembers the words said in the conference, that he was their hope, and that he needs to win to give everyone the courage to achieve victory.