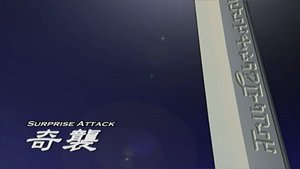 Ambush an episode from the anime series Zoids: Genesis based on TOMY's Zoids model franchise.

The episode begins with Ruuji and co. heading down into a large canyon. Using the map he got from the mayor of Katou. Everyone is extremely surprised at its accuracy, but Ra Kan is also amazed by Ruuji, who has successfully managed to figure out how to properly read the complex book. The reason for this trip is given in flashback. It was Ruuji, who had suggested that they should attack Digu, Digald's capital, even though Da Jin notes that this would be suicidal, even with their entire army at full capacity, and would lead to an even greater loss than before. But the idea was not the defeat Digald. Rather, it is simply to show their power, to bring confidence to the remaining forces who are hesitant to join their forces. He reveals that with the map told him of the otherwise difficult to find location that even after finding, would be impassable to anyone but Zoids transported by the Rainbow Jerk. Coupled with a decoy attack lead by the remaining forces, this should give their group enough time to sneak into and attack Digald's capital.

Indeed, the diversion is partially successful, and Felme leaves in the Bio Ptera to scout out the recently-increased activity in Zuuri, thus saving the Rainbow Jerk from its only airborne adversary. The group arrive at Digu, and Ruuji outlays a plan to try and destroy their main Bio Zoid factory, without causing collateral damage to the civilians.

The next morning Kotona takes Ron and flies straight into the front of Digald. She drops him off and he uses all his Zoid's bombs to inflict massive damage onto the Bio Raptor hangers. The, Ruuji, Galaga and Seijuurou launch a surprise attack, which quickly attacks their attention, only for Ra Kan and Rei Mii to attack from the other side. Inside, Jiin talks to the emperor, and instills him with doubt about the allegiance of the "sky people", who's help would indeed make the attack on Digu possible. He entrusts Jiin with claiming victory, and retires.

The sky people watch over the battle, but do not intervene. Outside, Galaga and Ruuji stumble across a Bio Zoid hanger with a large contingent of never-before-seen Zoids, but before they can destroy it, are attacked. Seijuurou saves them, and their opponent reveals himself. It is none other than Jiin himself, piloting the enormous Bio Zoid, the Bio Tyranno.

Ruuji attacks it, but his sword simply bounces off. Seijuurou is also overpowered, and even though Galaga uses his backpack, the Bio Tyranno reveals that it also has its own variant, and pins down the Deadly Kong. Galaga, out of desperation, decides to unseal his Zoid's left hand, but is stopped from this suicidal attack by Ruuji, who Evolts into the Mugen Liger, before attacking Jiin. Ron and Kotona are able to put up a smokescreen, before signalling Ka Ran and Mii to retreat. Out of sheer rang, Jiin attacks blindly, destroying much of his own city, but not Ruuji's forces.

They retreat, but are pursued by a massive army. It is then that they are met by Tize, who uses his Zoid's Thermic Burst to turn the ground behind Ruuji into molten lava, annihilating the pursuing force.

During the battle, the Sky People notice the Bio Raptor Guis, and are obviously shocked and outraged, for reasons left undisclosed.

The episode ends with Zairin vowing to defeat Ruuji with his Bio Volcano.